Embryonic stem cells have the enormous potential to treat and cure many medical problems. That is why the discovery that induced embryonic-like stem cells can be created from skin cells was rewarded with a Nobel Prize in 2012. But the process has remained frustratingly slow and inefficient, and the resulting stem cells are not yet ready for medical use. Research in the lab of the Weizmann Institute’s Dr. Yaqub Hanna, which appears Wednesday in Nature, dramatically changes that: He and his group revealed the “brake” that holds back the production of stem cells, and found that releasing this brake can both synchronize the process and increase its efficiency from around 1% or less today to 100%. These findings may help facilitate the production of stem cells for medical use, as well as advancing our understanding of the mysterious process by which adult cells can revert back into their original, embryonic state.
Embryonic stem cells are those that have not undergone any “specialization;” thus they can give rise to any type of cell in the body. This is what makes them so valuable: They can be used, among other things, to repair damaged tissue, treat autoimmune disease and even grow transplant organs. Using stem cells taken from embryos is problematic because of availability and ethical concerns, but the hopes for their use were renewed in 2006 when a team led by Shinya Yamanaka of Kyoto University discovered that it is possible to “reprogram” adult cells. The resulting cells, called “induced pluripotent stem cells” (iPSCs), are created by inserting four genes into their DNA. Despite this breakthrough, the reprograming process is fraught with difficulty: It can take up to four weeks; the timing is not coordinated among the cells; and less than one percent of the treated cells actually end up becoming stem cells. 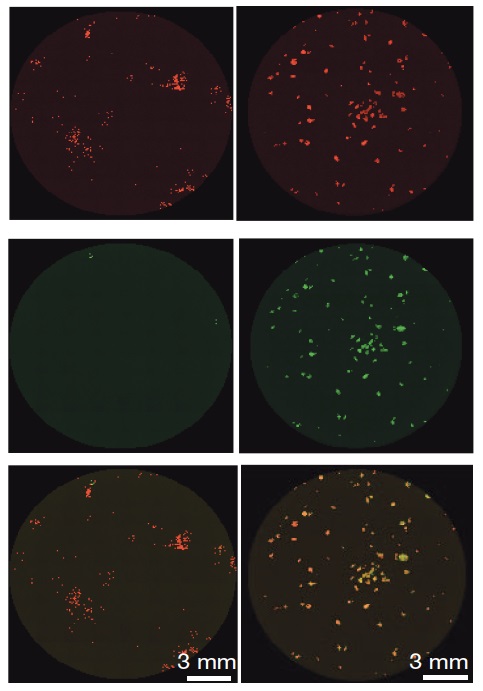 Left column: Previous method for creating induced pluripotent stem cells (iPSCs); right column: iPSCs produced with the new method developed by Dr. Hanna. Top: Skin cells (red); center: iPSCs from skin cells (green); bottom: superimposed top and center images. Skin cells that have been reprogrammed into iPSCs appear light yellow. Only a small percentage of the cells on the left have been reprogrammed, in contrast with the high success rate seen with the new method on the right

Hanna and his team asked: What is the main obstacle – or obstacles – that prevent successful reprograming in the majority of cells? In his postdoctoral research, Hanna had employed mathematical models to show that a single obstacle was responsible. Of course in biology, Hanna is the first to admit, experimental proof is required to back up the models. The present study not only provides the proof, it reveals the identity of that single obstacle and shows that removing it can dramatically improve reprograming.
Hanna’s group, led by Dr. Noa Novershtern, Yoach Rais, Asaf Zviran and Shay Geula of the Molecular Genetics Department, together with members of the genomics unit of the Institute’s Israel Structural Proteomics Center, looked at a certain protein, called MBD3, whose function was unknown. MBD3 had caught their attention because it is expressed in every cell in the body, at every stage of development. This is quite rare: In general, most types of proteins are produced in specific cells, at specific times, for specific functions. The team found that there is one exception to the rule of universal expression of this protein: the first three days after conception. These are exactly the three days in which the fertilized egg begins dividing, and the nascent embryo is a growing ball of pluripotent stem cells that will eventually supply all the cell types in the body. Starting on the fourth day, differentiation begins and the cells already start to lose their pluripotent status. And that is just when the MBD3 proteins first appear.
This finding has significant implications for the producing of iPSCs for medical use. Yamanaka used viruses to insert the four genes but, for safety reasons, these are not used in reprograming cells to be used in patients. This gives the process an even lower success rate of only around a tenth of a percent. The researchers showed that removing MBD3 from the adult cells can improve efficiency and speed the process by several orders of magnitude. The time needed to produce the stem cells was shortened from four weeks to eight days. As an added bonus, since the cells all underwent the reprograming at the same rate, the scientists will now be able, for the first time, to actually follow it step by step and reveal its mechanisms of operation. Hanna points out that his team’s achievement was based on research into the natural pathways of embryonic development: “Scientists investigating reprograming can benefit from a deeper understanding of how embryonic stem cells are produced in nature. After all, nature still makes them best, in the most efficient manner.”
Dr. Yaqub Hanna’s research is supported by Pascal and Ilana Mantoux, France/Israel; the Leona M. and Harry B. Helmsley Charitable Trust; the Sir Charles Clore Research Prize; the Benoziyo Endowment Fund for the Advancement of Science; Erica A. Drake and Robert Drake; the European Research Council; and the Fritz Thyssen Stiftung.