Syntax in our primate cousins

These results, obtained by researchers at the Ethologie Animale et Humaine research group (CNRS / Université Rennes 1), working with the universities of St Andrews in Scotland and Cocody-Abidjan in Ivory Coast, were published on the website of the Proceedings of the National Academy of Sciences. The results reveal the most complex example of “proto-syntax” yet discovered in a non-human species.

For two years, at the Taï Monkey Project research station in the Taï national park in Ivory Coast, researchers studied the behavior of Campbell’s monkeys (Cercopithecus campbelli campbelli). These monkeys live in small groups of ten or so individuals, made up of an adult male, several adult females and their progeny.

Researchers from the Ethologie Animale et Humaine research group (CNRS / Université de Rennes 1), working with a psychologist and an ethologist from the universities of St Andrews in Scotland and Cocody-Abidjan in Ivory Coast, studied the loud calls of adult males, whose vocal repertory is very different from that of females. They observed the vocal response of males to various disturbances of their environment, notably encounters with natural predators (like the eagle and leopard). They also carried out visual simulation experiments (with stuffed leopards and eagles) as well as acoustic experiments (using a loud-speaker amplifying leopard or eagle calls and grunts) suggesting the presence of these predators.

These experiments showed that males have a repertory of six types of alert calls (Boom, Krak, Hok, Hok-oo, Krak-oo, Wak-oo) but only rarely use them in isolation, preferring to produce long vocal sequences of an average of 25 successive calls (each sequence being made up of 1 to 4 types of different calls). Furthermore, Campbell’s monkeys combine calls in order to convey different messages. By modifying a call sequence or the order of calls within a sequence, the messages are changed, and can relay precise information about the nature of the danger (a falling tree, a predator), the type of predator (eagle, leopard), how the predator was detected (acoustically, visually)  but also about social events unrelated to predation (gathering before the group moves to another site, an encounter with another group of the same species at territory boundaries…).

This study shows the capacity of this monkey species for very complex vocal communication, both in the range of transmitted messages and in the techniques used to encode these messages. The same team of researchers had previously shown that males used a suffix « oo » to duplicate the size of his vocal repertory (which allowed them to produce the sounds Hok and Krak as well as Hok-oo and Krak-oo). In this new study, the ethologists explain some of the rules that govern the semantic combinations of calls. For example, Campbell’s monkeys can add a particular type of call to an existing sequence in order to make the message more precise or to alter it.  They can also combine sequences relaying different messages in order to convey a third message.

This ability to combine calls may have appeared during the monkeys’ evolution to compensate for limited vocal flexibility (monkeys have less vocal flexibility than birds and cetaceans) and provide a way to encode new messages.  This study shows a form of proto-syntax in this tree-dwelling monkey species which, as they live in a habitat with limited visibility, can only communicate vocally. This study raises the question of the potential existence of precursors to human language in animal vocal communication. 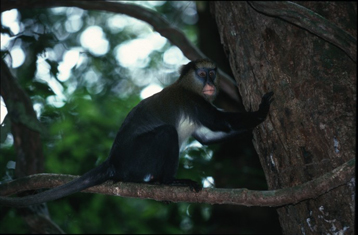 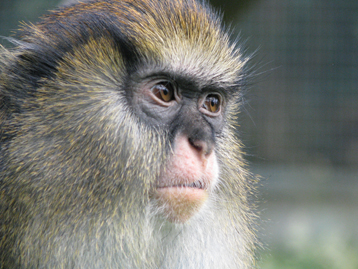