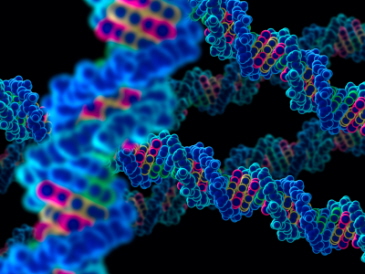 A DNA molecule in 3D

The results, published in the Proceedings of the National Academy of Sciences (PNAS), show that the method for detecting DNA damage within active genes is more sophisticated than previously thought.

The research team hope that the mechanistic insights provided by this study will help to explain the complicated genome-wide patterns of mutation that underlie the evolution of new species, also causing dangerous changes in cell behaviour.

The genetic information stored within the DNA of all living organisms contains the instructions which ensure cells function correctly.  If the DNA is damaged, either by external agents such as the ultraviolet light present in sunshine or by chemical reactions that occur naturally within cells, the instructions can become corrupted by mutations.

Mutations that alter critical genes can lead to diseases such as cancer, or can enable pathogens such as bacteria to acquire new and dangerous characteristics such as antibiotic resistance.

Because the information within the DNA is so important, cells invest a huge amount of effort in repairing the damage before it can cause harm. But because damage is occurring continuously, and the cell does not have limitless resources, the repair activity must be targeted to the regions of greatest need.

When patterns of mutation are studied, it is clear that genes which are switched on are repaired first, with the inactive parts of the genome being repaired much more slowly.

Research over the past 20 years has shown that this two-tier system of repair relies on the ability of the molecular machines that read the active genes, called RNA polymerases, to sense the DNA damage and attract DNA repair systems to the problems that they have detected.

Researchers from the University of Bristol’s School of Biochemistry have now shown that a molecular motor protein called Mfd – the first helper to be attracted by RNA polymerase when it gets into difficulties – acts as a long distance scanner for DNA damage.

Professor Nigel Savery, who led the group, said “Our results show that the method for detecting DNA damage within active genes is more sophisticated than expected. The pathway that links DNA repair to gene expression has the potential to act over much greater distances than previously thought, because once it has been loaded onto the DNA by an RNA polymerase this first-response motor protein travels for hundreds of base pairs – the building blocks of the DNA double helix – in search of damage.

“Our work also provides the first indication that sequences of DNA where RNA polymerases briefly slow down and pause may be acting as signals for the DNA repair proteins to scrutinise the neighbouring DNA particularly carefully.”

The research was funded by the Biotechnology and Biological Sciences Research Council (BBSRC).

The Biotechnology and Biological Sciences Research Council (BBSRC) invests in world-class bioscience research and training on behalf of the UK public. Our aim is to further scientific knowledge, to promote economic growth, wealth and job creation and to improve quality of life in the UK and beyond.

Funded by Government, and with an annual budget of around £467M (2012-2013), we support research and training in universities and strategically funded institutes. BBSRC research and the people we fund are helping society to meet major challenges, including food security, green energy and healthier, longer lives. Our investments underpin important UK economic sectors, such as farming, food, industrial biotechnology and pharmaceuticals.

For more information about BBSRC, our science and our impact see: http://www.bbsrc.ac.uk