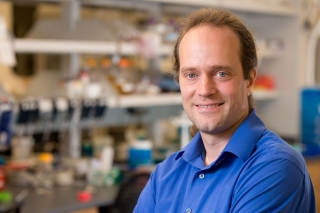 Zev Bryant, an assistant professor of bioengineering, and his team are creating tiny protein motors that can be controlled remotely by light.

In every cell in your body, tiny protein motors are toiling away to keep you going. Moving muscles, dividing cells, twisting DNA — they are the workhorses of biology. But there is still uncertainty about how they function. To help biologists in the quest to know more, a team of Stanford bioengineers has designed a suite of protein motors that can be controlled remotely by light.

“Biology is full of these nanoscale machines that can perform complex tasks,” said Zev Bryant, PhD, assistant professor of bioengineering and leader of the team. “We want to understand how they can convert chemical energy into mechanical work and perform their specific tasks in cells.”

Bryant’s team, including doctoral student Muneaki Nakamura, designed blueprints for protein motors that would respond to light. Splicing together DNA from different organisms such as pig, slime mold and oat — the oat had the light-detecting module — the bioengineers created DNA codes for each of their protein motors.

The remote-controlled nanomotors are described in a paper that appeared online Aug. 3 in Nature Nanotechnology. Bryant is senior author of the paper, and Nakamura is the lead author.

When exposed to light, the new protein motors change direction or speed. “It’s pretty fine spatial control; you can decide where the light is and where it isn’t, and control motors in this very exquisite way,” Bryant said. Being able to control the motors in real time should be a boon for cell and developmental biologists trying to study forces and motion in living things.

“It’s an entirely new project for us to be moving inside cells and organisms and to be working more closely with biologists,” Bryant said. Now that he and his team have a basic blueprint, they will be able to customize these motors for biologists who are looking into specific tasks.

“In a future phase of our research, I hope that we can provide cell biologists with tools that allow them to change very specifically the properties of molecular motors in their cellular contexts,” Bryant said.

There’s also the possibility of using the controllable motors outside of biology, in diagnostic devices, for example. Bryant noted that researchers have worked on harnessing molecular motors to perform functions similar to their biological roles, “transporting molecules, sorting molecules, and concentrating molecules.”

But first and foremost, Bryant is rebuilding these motors — incorporating features never before seen in biology — in an effort to illuminate their true nature.

Other Stanford co-authors of the paper are graduate students Lu Chen and Tony Schindler. Researchers of UC-Berkeley also contributed to the study.

The study was supported by a Pew Scholars Award, the National Institutes of Health, an American Heart Association Predoctoral Fellowship, a National Science Foundation Graduate Research Fellowship and a Stanford Graduate Fellowship and the Howard Hughes Medical Institute.