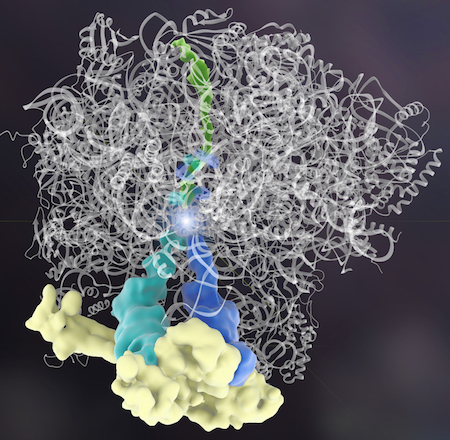 The image illustrates how the protein, Rqc2p in yellow, coordinates to charged tRNA molecules within the 60S ribosome subunit. Credit: Janet Iwasa, University of Utah

The new research has uncovered a new mechanism by which ribosomes can synthesize proteins. The studies show that a protein involved in the cell’s ribosome quality control system mediates the elongation of peptides that become stalled during protein sysnthesis. Surprisingly, it does this in the absence of both messenger RNA and the ribosome’s small, message-reading subunit.

“This is a mode of protein synthesis that we’ve missed for 50 years. It’s totally unprecedented,” says Jonathan Weissman, an HHMI investigator at the University of California, San Francisco (UCSF). Weissman co-led the new study with Adam Frost, also at UCSF, and Onn Brandman, whose lab is at Stanford University. Learning more about how and when cells add amino acids to the ends of stalled peptides could lead to new insights about neurodegeneration, which can occur when protein quality control measures fail. The scientists published their findings January 2, 2015, in the journal Science.

The ribosome is a large molecular complex of RNA and protein. When eukaryotic ribosomes are isolated from cell extracts, two different fractions are obtained, representing two subunits. The smaller 40S subunit binds the messenger RNA that constitutes the protein’s genetic blueprint, as well as the transfer RNA that carries each specific amino acid to be added to the growing chainlike protein molecule. The larger 60S subunit catalyzes the formation of the bond between each amino acid and the growing protein chain.

The new discovery, the scientists say, was serendipitous. The team initially sought to better understand a quality control complex that Weissman and Brandman discovered in 2012, when Brandman was a postdoctoral researcher in Weissman’s lab. The Ribosome Quality Control Complex (RQC) recognizes and destroys incomplete proteins that protrude from large ribosomal subunits that become detached from the rest of the ribosome when protein translation stalls.

“We wanted to understand how this happens,” Weissman says “How does the complex recognize 60S ribosomes with nascent chains on them, and how does it clear these nascent chains? By doing logical experiments and following up on unusual aspects of our data, we ended up in a place that was very, very different than we could have anticipated.”

With few clues as to how the RQC functioned, the scientists agreed they needed to see it in action. Peter Shen, a postdoctoral researcher in Frost’s lab, isolated RQCs from yeast cells and used cryo-electron microscopy to develop three-dimensional images of their interactions with large ribosomal subunits. Shen’s images showed that when the RQC latched onto a ribosomal subunit, something nestled into the cavity in the ribosome where amino acids are delivered by transfer RNAs (tRNAs) so that they can be added to a growing protein. That observation was dependent on the presence of a component of the RQC called Rqc2.

New technology and better computational techniques allowed the team to refine its images, until it became clear that there was indeed a tRNA molecule sitting in that cavity, which is known as the ribosome’s A site.“That was very strange because we thought all protein synthesis had ended. The small subunit had gone away; the mRNA had gone away. We thought the ribosome was completely in destruction mode. So why was it bringing in a tRNA with an amino acid ready to be added on to the nascent chain?” Weissman says.

“We initially just kind of scratched our heads. It wasn’t clear to us why the A site would be occupied by a tRNA, or even how,” Frost says. The team wondered about the identity of the tRNAs: Could any of the cell’s tRNAs enter the A site after it had been separated from the genetic message and the rest of the ribosome? Or did specific tRNAs arrive with specific amino acids? Collaborating with Alan Lambowitz at the University of Texas, Austin, they found that only tRNAs carrying the amino acids alanine or threonine were present in the complex.

As the scientists pondered their findings, they realized that an earlier observation – also puzzling – could be a clue. In 2012, they had noted that peptides that stalled in the ribosome were bigger in the presence of Rqc2. “This was odd, because the only way we knew for a peptide to get longer was through [a fully assembled] ribosome and an mRNA,” Weissman says. “Rqc2 only came on after the small subunit and the mRNA were gone. How was it making the peptide longer?”

Brandman’s lab conducted a series of biochemical experiments that confirmed that the stalled peptides were elongated with random sequences of alanines and threonines. Because these chemicals are abbreviated “A” and “T” and were added to the end of the peptide chain known as its carboxy, or C, terminus, the team called the extensions CAT tails.

Together, the evidence was convincing. “What all of this was saying was that we were getting a totally unprecedented mechanism for ribosome-mediated protein synthesis,” Weissman says. “Every other time that people have seen the ribosome make or extend proteins, it’s been a messenger RNA that’s responsible for bringing the tRNA to read out the genetic code, and you need a large and a small subunit. Here we had synthesis with no messenger RNA and no small subunit. And a protein, Rqc2, was responsible for recognizing and recruiting these specific tRNAs.”

“Evolution is so diverse in how it addresses cellular needs,” Brandman says. “This work really shows that there are a lot of big things left to discover.”

The scientists don’t know the CAT tails’ function yet, but they have some ideas. They have evidence that suggests that CAT tails may trigger a stress response in the cell. A CAT tail might tag an incomplete peptide as a target that should be destroyed. It might also signal that although synthesis has stalled, the ribosome’s basic machinery is intact, and that ribosome should be put back into service. Weissman, Frost, and Brandman intend to follow up on all these possibilities as they continue to investigate the details of how CAT tails are synthesized. Because defects in the ribosomal quality control system have been shown to cause neurodegeneration in humans and animals, another high priority is to investigate the potential link between CAT tails and disease.