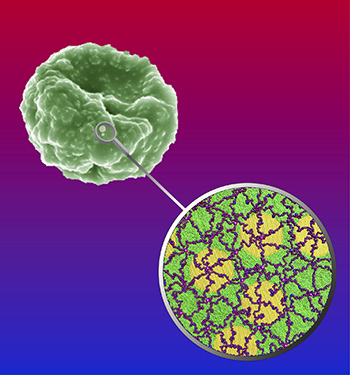 A team of researchers from four universities has pinpointed one of the mechanisms responsible for the progression of malaria, providing a new target for possible treatments.

Using computer modeling, Carnegie Mellon President Subra Suresh and his colleagues found that nanoscale knobs, which form at the membrane of infected red blood cells, cause the cell stiffening that is in part responsible for the reduced blood flow that can turn malaria deadly. The findings represent a new understanding of the mechanisms behind the progression of malaria, opening a new avenue of research into therapies for the disease that infects close to 200 million people each year.

Suresh and researchers from The Pennsylvania State University, the Massachusetts Institute of Technology and the University of Melbourne in Australia reported their findings in the online early edition of the Proceedings of the National Academy of Sciences (PNAS).

Malaria is caused by Plasmodium parasites, which are spread to people via infected Anopheles mosquitos. While malaria is preventable and treatable, worldwide there are still approximately 198 million cases each year, resulting in an estimated 584,000 deaths, according to the World Health Organization.

“Many of malaria’s symptoms are the result of impeded blood flow, which is directly tied to structural changes in infected red blood cells,” said Suresh, a co-author of the study who holds faculty appointments in CMU’s College of Engineering, School of Computer Science and Heinz College. “Computer modeling gives us an unprecedented opportunity to investigate these structural changes and improve our understanding of this often deadly disease.”

When a person contracts malaria, the parasites grow and multiply in the liver and then move into the red blood cells. Normally, red blood cells are very elastic, which allows them to flow easily through the body’s veins and stretch to squeeze through narrow capillaries connected to the body’s vital organs. When red blood cells are infected by Plasmodium parasites, two changes occur: the cells become stiff, so they can’t stretch to fit through narrow capillaries, and the cells become sticky and adhere to the walls of veins. As a result, the infected cells obstruct blood flow, preventing healthy red blood cells from expediently reaching and delivering oxygen and nutrients to organs, including the brain. The infected cells also can’t make their way to the spleen, which would eliminate them from the body.

In order to visualize what happens at the cell membrane during malarial infection, the research team turned to a computer simulation technique called coarse-grained molecular dynamics (CGMD). CGMD has proven to be very valuable for studying what happens at the cell membrane because it represents membrane’s complex proteins and lipids with larger, simplified components rather than atom by atom. Doing this requires less computing time and power than standard atomistic models, which allows scientists to run simulations for longer periods of time while still accurately recreating the behavior of the cell membrane. Typically, researchers introduce different variables into the simulation and observe how the membrane reacts. In the current study, the researchers seeded the model membrane with proteins released by one of the most common, and the most deadly, malarial parasites, Plasmodium falciparum.

From their simulation, the researchers found that the stiffening of the red blood cell membrane had little to do with the remodeling of spectrin. Instead, the nanoscale knobs that cause the red blood cells to stick to the vein’s walls also cause the membrane to stiffen through a number of different mechanisms, including composite strengthening, strain hardening and density-dependent vertical coupling effects.

According to the researchers, the discovery of this new mechanism responsible for the stiffening of infected red blood cells could provide a promising target for new antimalarial therapies.

This research was supported by the National Science Foundation (CMMI-0754463, CBET-1067523 and CBET-1240696). Co-authors of the study include Yao Zhang, Changjin Huang, Mahdi Golkaram and Sulin Zhang of The Pennsylvania State University; Sangtae Kim and Ju Li of the Massachusetts Institute of Technology; and Matthew W. A. Dixon and Leann Tilley of the University of Melbourne.