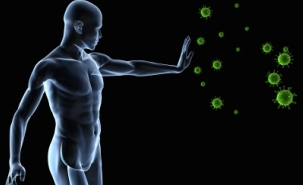 “The expression ‘free radicals’ is often associated with nasty molecules we’ve been told to guard against by eating fruits and vegetables that are high in so-called antioxidants – molecules that can neutralize these free radicals. It turns out that our own cells generate free radicals when invaded by viruses; these serve a critical role when our cells mount an immune response to viral invasions,” says senior author and biochemistry professor Nathalie Grandvaux of the University of Montreal and a scientist at the University of Montreal Hospital Research Center.

The University of Montreal study builds on previous research that shows human cells contain key sensor molecules that detect virus invasions. Sensor molecules, including RIG-I and Mda-5, were found to bind to a molecule called MAVS when they sense a virus. This process unleashes a signaling cascade, or a series of chemical reactions, which turns on antiviral genes. Until now, however, it was unclear how the process occurs.

Dr. Grandvaux and her colleagues were able to show that airway cells contain an enzyme called NOX2 that snatches oxygen from the surrounding air and converts it into highly reactive free radicals. Instead of ravaging cells, these free radicals react with other molecules to drive production and maintain the stability of MAVS molecule to essential levels. This leads to a chemical cascade that activates genes needed to mount an antiviral response.

Although the research team did find that free radicals are beneficial, they can sometimes be too much of a good thing. “In the presence of a virus, NOX2 also controls inflammation in our airways, which when excessive causes virus-associated respiratory problems, including bronchiolitis or on a long-term basis, asthma,” says Dr. Grandvaux. “NOX2 is a prime target for drugs being developed to combat such inflammatory diseases. Indeed, a related enzyme called NOX1 is also being targeted against inflammatory diseases of the digestive tract.”