ANN ARBOR, Mich. — As loved ones with dementia disappear into symptoms of aggression, agitation or delusions, families are left with few good medical solutions. A new generation of antipsychotic medications gained popularly in the 1990s because they avoided side effects such as Parkinson’s syndrome associated with conventional antipsychotic medications used to treat dementia. 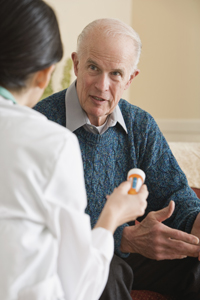 But a new study led by University of Michigan and VA Ann Arbor Healthcare System researchers shows the use of these second-generation medications began to decline significantly in 2003, years ahead of a “black box” warning from the Food and Drug Administration in 2005 – the strongest type of warning issued by the FDA.

Helen C. Kales, M.D., associate professor of psychiatry at the University of Michigan Medical School and researcher at the VA Ann Arbor Healthcare System, says this shows that emerging understanding of the medications’ increased risk of diabetes and stroke was taken seriously.

Prescriptions of the second-generation medications dropped off more steeply after the black box warning, which shows that it too had an impact, says Kales, the study’s lead author.

“If you look at the history of black box warnings, sometimes they have an effect and sometimes they do not,” she says. “When the warning was issued about children taking antidepressants, we saw a big drop in use, but in other cases there wasn’t much change. In this case, providers appeared to be responsive.”

The analysis, published Feb. 7 in the Archives of General Psychiatry, drew from data on more than 250,000 patients from national Veterans Affairs registries maintained in Ann Arbor. It’s the only study on the topic to adjust for demographic shifts, the article notes.

While the number of dementia cases among VA patients 65 and older more than tripled from 30,000 in 1999 to 100,000 in 2007 as World War II and Korean War veterans aged, the study found the use of second-generation antipsychotic medications declined. Prescriptions fell from about 18 percent of patients to 12 percent.

“Without adjusting for the aging population, you wouldn’t see that the decline started before the warning was issued,” Kales says.

The study authors do not pinpoint a single reason for the decline during the period before the warning, but observed that doctors and media outlets were starting to take note of fatal risks associated with the class of medications, which includes Olanzapine (Zyprexa), Riperidone (Risperdal) and Quetiapine (Seroquel).

“The take-home message is that families need to take a measured approach and have a conversation with their doctor about the potential benefits and risks,” she says. “The behaviors associated with dementia can put a huge burden on families and unfortunately, there’s no magic bullet.”

Funding: The study was funded by a grant from the National Institute of Mental Health and the VA’s Serious Mental Illness Treatment, Research and Evaluation Center in Ann Arbor.