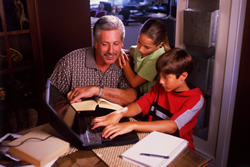 Those are the results of a new study to be published in the April print issue of Pediatrics, by University of Michigan Health System researchers. The study was led by R. Neal Davis, a former fellow at the University of Michigan Health System’s Child Health and Evaluation Research (CHEAR) Unit in the Division of General Pediatrics. He is now a pediatrician at Intermountain Healthcare in Murray, Utah.

The researchers studied data from 1,746 fathers of 1-year-old children in the Fragile Families and Child Wellbeing Study. Fathers reported on how often they played with, sang to and read to their kids. They also reported whether they had spanked their kids in the last month and whether they had spoken to their child’s medical provider in the past year. The fathers were also assessed for depression.

“The effect of mothers’ depression on parenting behaviors has been well established,” said Sarah Clark, senior author on the study. “This study is important because it demonstrates that depression in fathers has very tangible effects on how those fathers interact with their young children.”

The findings also offer an important cue to action, as over three quarters of depressed fathers reported talking to their child’s doctor in the previous year. “This suggests that visits to the pediatrician may provide an ideal opportunity to discuss specific parenting behaviors with fathers and to refer depressed fathers for appropriate treatment,” says Davis.

About CHEAR: The Child Health Evaluation and Research (CHEAR) Unit of the University of Michigan is a national leader in the analysis of the American health care system and the organization and financing of care for children. Over the past five years the multidisciplinary CHEAR Unit has been awarded over $25 million in research grants from federal, state, and foundation sources.