Greg Elliott asserts that “mattering” is the fundamental motivation in human beings. Credit: Mike Cohea/Brown University
Teens and adolescents who believe that they matter to their family – that is, they feel the make a difference in the family’s daily doings- are significantly less likely to threaten or engage in family violence, according to a new study by Brown sociologist Gregory Elliott. The findings are published in the Journal of Family Issues. 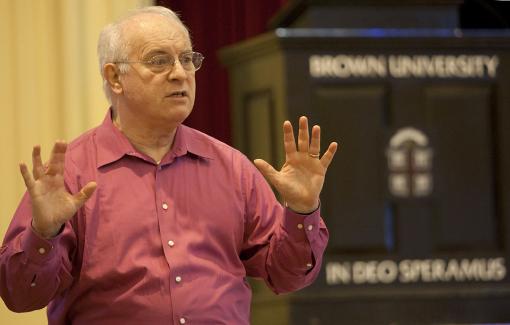 PROVIDENCE, R.I. [Brown University] — Adolescents who believe they matter to their families are less likely to threaten or engage in violence against family members, according to a new study led by Brown University sociologist Gregory Elliott. The research s published in the Journal of Family Issues.

A relatively new concept, “mattering” is the belief persons make a difference in the world around them. Mattering is composed of three facets — awareness, importance, and reliance. Do others know you exist? Do they invest time and resources in you? Do they look to you as a resource? Elliott asserts that mattering is the fundamental motivation in human beings. “Above all else, there’s a need to matter,” he says.

The data for this analysis comes from telephone interviews with a national sample of 2,004 adolescents, age 11-18, as part of the 2000 Youth Risk Behavior Survey. Controlling for age, gender, race, religiosity, and family socioeconomic structure and size, the findings reveal that failing to matter to one’s family increases the probability of violence, whereas a strong feeling of mattering is likely to protect the adolescent from engaging in violent behavior toward a family member.

The authors believe the mechanism behind mattering is that it has an effect on both self-esteem and on one’s attitude toward violence, which ultimately determines one’s violent behavior.

“Mattering is the prime mover in a chain reaction involving self-esteem and attitudes toward violence,” said Elliott. “If you don’t matter, it sets up a chain of unfortunate feelings and events that makes it difficult to get along.”

Elliott’s co-authors are Melissa Colangelo of Brown University, Susan Cunningham of the College of the Holy Cross, and Richard Gelles of the University of Pennsylvania.