Cool football fever before it kills your relationship

“Football is an all-American sport and people love it, especially in the South. But for some people, watching football can become an obsession,” says Josh Klapow, Ph.D., University of Alabama at Birmingham clinical psychologist in the School of Public Health. 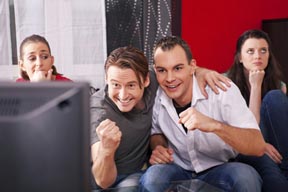 Dedication to a sport or team is normal, Klapow says, but a football addiction can endanger relationships and wreak havoc on the life of a super-fan.

“It’s not how much time you spend watching football that matters,” Klapow says, “it’s whether or not that is causing negative behaviors in your life. Whether it’s 10 hours per week or 40, the issue is its affect on your real-life obligations.”

So how do you define an abnormal love affair with football? Klapow says if a person is thinking about football while doing other things, irritated when a game is interrupted, missing family or other important events to watch a game or depressed, angry or violent when a team loses, that signals a loosening grip on reality and too much adoration for a game.

If you recognize this behavior in someone you love, Klapow says don’t sugarcoat it. If their addiction to sports is running your relationship, let them know.

The good news, Klapow says, is this can be helped. But as in all addictions, the addict first must recognize there is a problem.

“Ultimately this is a habit that needs to change, and moving forward means changing your behavior a little bit at a time,” Klapow says.

Klapow suggests the following tips to manage a sports addiction:

“Watching sports provides an escape route for many people, enabling them to avoid thinking about problems or feelings they don’t want to confront. But the longer it goes, the stronger it gets and the more relationships it will ruin. Seeking professional help can change this,” says Klapow.