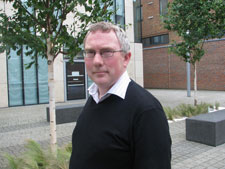 The report, written by sociology lecturer Dr Andrew King from Kingston University, also highlights a lack of dedicated social spaces for older (50+) lesbian, gay, bisexual and transgender (LGBT) people and a need for council and NHS staff to be much more aware of LGBT issues. It has implications for GPs, health and social services and council workers at a time when Britain’s population is ageing. Charity Age UK estimates that 1 in 15 users of their services are lesbian or gay.

This qualitative research, commissioned by Tower Hamlets Borough Council and co-written with Dr Ann Cronin, formerly from the University of Surrey, involved detailed interviews with 22 older lesbian, gay and bisexual individuals across a range of income levels during a period of three months. The project also encompassed focus groups and a thorough review of existing research.  It revealed that accessing services and support can be a difficult and worrying experience.

There was concern among older lesbian, gay and bisexual people that they would not ‘fit in’ in residential care and did not want other residents to know about their sexuality.  Although the research did not suggest that the people spoken to wanted gay-specific residential or health care, those questioned said these services should be more inclusive and of a high standard.  “A friend of mine is the only gay man in his care home,” 54-year-old John said.  “He has loads of life experience, and here he is in a huge development of old ladies and he’s a bit of a curiosity to them you know. And that’s looking at it quite positively.”

Participants also expressed concerns about homophobia or not being treated with respect by day and/or residential carers, and worries about having to hide any clues to their sexuality – such as gay magazines – in their homes. The report also found that some older lesbian and gay people who joined local community groups felt excluded because of the automatic presumption that everyone was heterosexual. “It’s more subtle than being excluded. It’s just you don’t get included,” 62-year-old Jane said.  “I find the other members very cliquey because they all meet up and have this language of grandchildren – ‘my daughter did this or that’ and there’s just nowhere for me to go with it.”

The key recommendations made in the report include making dedicated social spaces available for older LGBT people as an alternative to the commercial gay scene, which is seen as both ageist and expensive.  It also suggests developing a more open and inclusive atmosphere in such places as GP surgeries and libraries, and ongoing awareness training for staff.

“Older LGBT people grew up in a much more homophobic and transphobic climate than we have now,” report co-author Dr Andrew King from Kingston University said.  “For some that has had a bigger impact than others.  One gay man said he would only go to gay clubs a long way from his home. There have been many legal advances in recent years, such as the Civil Partnership Act and Gender Recognition Act, but it’s how all this is actually played out in everyday lives that really counts.”

A series of workshops has been taking place with service providers during the past year to make them aware of issues facing older LGBT adults and to prompt them to come up with ideas to improve their services with this knowledge in mind.

The final stage of the project, which received funding from the Economic and Social Research Council, is a showcase conference in London on November 9 at which the research findings will be discussed with service providers and older LGBT people in Tower Hamlets.  Ideas generated will be disseminated nationally to help facilitate the development of good practices and ensure that the services provided by local authorities benefit all residents, regardless of sexual orientation.   “The hope is that other councils, NHS trusts and service providers around the UK will be able to adapt and adopt the policies for older LGBT people in their own areas,” Dr King said.

*No real names of case studies have been used

Find out more about studying sociology at Kingston University.