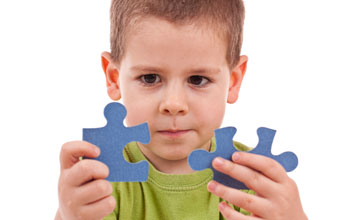 An important context for figuring out problems through reasoning is puzzle play, say researchers at University of Chicago.

Psychologist Susan Levine and colleagues recently conducted a study that found 2-4 year-old children, who play with puzzles, have better spatial skills when assessed at 4 1/2 years of age.

After controlling for differences in parents’ income, education and overall amount of parent language input, researchers say puzzle play proved to be a significant predictor of spatial skills–skills important in mathematics, science and technology and a key aspect of cognition.

“As early as the preschool years and persisting into adulthood, there are individual and gender differences on certain spatial tasks, notably those involving mental rotation [of objects],” the researchers write in their report, published in Developmental Science. “These variations are of considerable interest because of their reported relation to mathematics achievement.”

Improvements in math education are a point of emphasis for the National Science Foundation, which partly funded the study. “This study brings greater awareness of the learning opportunities for children in everyday activities,” said Soo-Siang Lim, program director for the NSF’s Science of Learning Centers Program. “It is important because this and follow-up studies could potentially lead to relatively easy and inexpensive interventions to improve spatial skills important for STEM education.”

STEM education involves science, technology, engineering and mathematics. Activities such as early puzzle play may lay the groundwork for development in these areas. In particular, the ability to mentally transform shapes is an important predictor of STEM course taking, degrees and careers, say researchers.

“The children who played with puzzles performed better than those who did not on tasks that assessed their ability to rotate and translate shapes,” said Levine, a leading expert on mathematics development in young children.

The study was the first to look at puzzle play in a naturalistic setting. The researchers followed 53 child-parent pairs from diverse socioeconomic backgrounds for a two-year period. Researchers recorded parent-child interactions on video during 90-minute sessions that occurred every four months between 26 and 46 months of age.

The boys also performed better than the girls on a mental transformation task given at 54 months of age.

“Further study is needed to determine if the puzzle play and the language children hear about spatial concepts actually causes the development of spatial skills and to examine why there is a sex difference in the difficulty of the puzzles played with and in the parents’ interactions with boys and girls,” said Levine. “We are currently conducting a laboratory study in which parents are asked to play with puzzles with their preschool sons and daughters, and the same puzzles are provided to all participants.

“We want to see whether parents provide the same input to boys and girls when the puzzles are of the same difficulty,” Levine said. “In the naturalistic study, parents of boys may have used more spatial language in order to scaffold their ability to put more difficult puzzles together.”

Alternatively, the difference in parent spatial language and engagement may be related to a societal stereotype that males have better spatial skills. “Our findings suggest that engaging both boys and girls in puzzle play can support the development of an aspect of cognition that has been implicated in success in the STEM disciplines,” Levine said.

Joining Levine in writing the paper are Kristin R. Ratliff and Janellen Huttenlocher of the University of Chicago and Joanna Cannon of the New York City Department of Education.