Among the key findings of a novel analysis of Alzheimer’s disease-related Medicare expenditures, is that the federal insurer faces particularly high payments for hospitalization during the period between when patients are first diagnosed and when they enter long-term care. 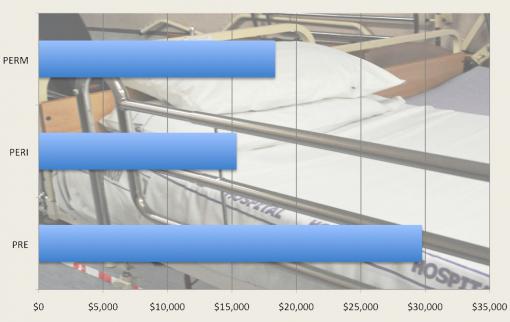 Brown University experts collaborating with researchers from Pfizer Inc. analyzed millions of nursing home and Medicare patient data from 1999-2007 to determine that between the time patients were diagnosed with ADRD and the time that they entered a nursing home, Medicare spent, on average, $29,743 per patient on ADRD-related hospitalizations. That figure dropped below $19,000, over a much longer timeframe, once the patients became permanent nursing home residents.

“We could save a lot of tax dollars, and a lot of everyone’s dollars, if we can keep people out of the hospital,” said health economist Judith Bentkover, adjunct professor of health services, policy, and practice at Brown University and lead author of a paper published today in The American Journal of Alzheimer’s Disease and Other Dementias. “It’s a real win-win if there can be research directed at ways to maintain people with ADRD at home and out of the hospital and keep them healthy and functioning for as long as possible. That’s where the real breakthroughs have to be made. It is especially before the patient is admitted into the nursing home or in the final stages of the disease that there is a great opportunity for economic savings.”

Alzheimer’s disease alone in the United States costs $183 billion a year, according to the Alzheimer’s Association, with Medicare covering about 51 percent of the costs. To obtain new insights about when such costs are the most intense and what services are used most at those times, this study focuses on Medicare costs in a new way: by distinct phases based on the patient’s long-term care status. The authors defined the PRE phase, which averaged 260 days, as the period after the ADRD diagnosis but before nursing home care. Next, the 360-day PERI phase covered the period between the first nursing home admission and permanent nursing home residency. Finally, the 829-day PERM period covered all the time patients then remained in the nursing home.

The study yielded several other findings, including:

Bentkover said that because the findings identify the timing of those costs which are the most intense per patient and per day, they can help guide the various players throughout the health care industry to develop appropriate ways of containing costs. Providers, especially those whose reimbursements will be grouped together within accountable care organizations, will have an incentive to reduce costly hospitalizations in the PRE phase.

The results can also help public health researchers focus their future efforts, notably on the PRE phase which will, in turn, provide deeper insights to efficient Medicare spending for ADRD patients, Bentkover said.

In addition to Bentkover, other authors include Vincent Mor, Shubing Cai, and Rajesh Makineni of Brown, and Lisa Mucha and Michael Treglia of Pfizer Inc.