Before examinations and in critical situations, we need to be particularly receptive and capable of learning. However, acute exam stress and stage fright causes learning blockades and reduced memory function. Scientists from the Max Planck Institute of Psychiatry in Munich have now discovered a mechanism responsible for these cognitive deficits, which functions independently of stress hormones. In animal studies, the researchers show that social stress reduces the volume of Homer-1 in the hippocampus – a region of the brain that plays a central role in learning. This specific protein deficiency leads to altered neuronal activity followed by deterioration in the animals’ learning performance. In the experiments, it was possible to prevent the cognitive deficit by administering additional volumes of the protein to the mice. This suggests that Homer-1 could provide a key molecule for the development of drugs for the treatment of stress-induced cognitive deficits. 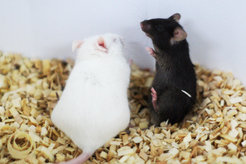 Intruder alert! The black mouse is being placed in the white mouse’s territory for five minutes, which causes the stress levels of the incumbent white mouse to rise.

Klaus Wagner, a scientist at the Max Planck Institute of Psychiatry, studied the learning behaviour of mice that had been subjected to severe stress. He exposed the animals to social stress – a pressure also frequently experienced by humans today. A male mouse was placed in the cage of an aggressive member of the same species for five minutes. The latter tried to banish the “intruder” by attacking it. Unlike in nature, the test mouse was unable to flee from the cage and was under severe stress, as substantiated by measurements of the stress hormones in its blood.

Following a period of eight hours in which the animal was able to recover in its own cage, its behaviour was examined. While the mouse’s motivation, activity and sensory functions were not impaired at this time, it displayed clear deficits in its learning behaviour. A single five-minute situation of social stress was sufficient, therefore, to impair the animal’s learning performance hours later.

The researchers at the Max Planck Institute then tried to establish which mechanisms were responsible for these cognitive deficits. They identified the protein Homer-1, the concentration of which declines specifically in the hippocampus after exposure to stress. Through its interaction with the neuronal messenger substance glutamate and its receptors, Homer-1 modulates the communication in the neuronal synapses. When the volume of Homer-1 in the hippocampus falls after exposure to stress, the natural receptor activity is severely disrupted and learning capacity declines. The researchers were able to prevent this effect by increasing the Homer-1 concentration again.

Mathias Schmidt, Research Group Leader at the Max Planck Institute of Psychiatry interprets the results as follows: “With our study, we demonstrated the regulation of glutamate-mediated communication in the hippocampus, which directly controls learning behaviour. This mechanism functions independently of stress hormones for the most part. The molecule Homer-1 assumes a key role in this process and will hopefully provide new possibilities in future for targeted pharmaceutical intervention for the avoidance of cognitive deficits.”