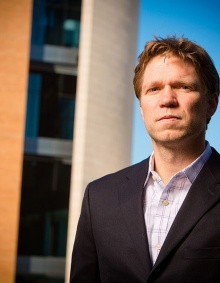 “A picture is starting to develop in which the older br0ther, Tamerlan, appears to have had a difficult time adjusting to American life after coming to the U.S. in 2003,” says Antonius. “He appears to have felt disenfranchised and became increasingly isolated with time.

“Joining a radical religious group or ideology may have given Tamerlan a sense of belonging and an identity that he craved,” Antonius continues. “Although we don’t know for sure at this point, the violence and terrorist act he is suspected of having committed may have been a product of his evolving personality, which may have allowed him to be swayed by an ideology or a group’s terrorist rhetoric. “

Antonius notes that this is not atypical for those involved in terrorism. “It is most probable that the terrorist’s personality evolves over time and is influenced by the interaction of various factors,” he says. “For example, a person may join a group at first based on non-violent religious or political views, but over time, his ideology and personality is shaped by this experience. Once the group starts engaging in violence, he begins to see the enemy as evil and threatening to his group’s ideology. The rationale for violent acts then supersedes the desire to avoid violence.”

He says that there often is a difference between those who end up as terrorist leaders versus those who are considered idealist or naïve followers. “Some argue that the leaders are more likely to exhibit a history of troubling personality characteristics, such as antisocial and narcissistic traits,” he explains. “These are the people who are more callous and more likely to use violence, showing little or no remorse for their actions and a disregard for social norms.

“In the end, the terrorist’s psychological makeup probably consists of a myriad of evolving factors and there is a great deal of heterogeneity,” Antonius says.  “Interestingly, the general consensus is that most terrorists do not meet criteria for a mental disorder,” he adds.

As director of forensic research in the UB Department of Psychiatry and at Erie County Forensic Mental Health Services, Antonius works with defendants who have a mental illness or who need to be assessed for mental health problems.

He also conducts psychological testing to assess risk propensity, personality characteristics, cognitive impairment and other issues related to legal matters, such as competency to stand trial and mental health defenses.

Antonius co-edited the forthcoming book, The Political Psychology of Terrorism Fears, (Oxford University Press, 2013) with Samuel J.Sinclair, and is the founding co-editor of the journal, Behavioral Sciences of Terrorism and Political Aggression. He is the recipient of awards from the Association for Threat Assessment Professionals, the International Society for Research on Aggression, and the American Psychological Foundation.