Digital tools can be an easily accessible and effective way of treating veterans who suffer from brain injuries and post-traumatic stress.

For brains rattled by war, UC San Francisco scientists are advancing research and clinical care with new software, apps and online tools to help “retrain the brain” for resilience and recovery.

UCSF researchers affiliated with the San Francisco Veterans Affairs Medical Center (SFVAMC) discussed these new tools at the 2013 “Brain at War” symposium, convened June 20 in downtown San Francisco.  The symposium – hosted by the Veteran’s Health Research Institute (NCIRE), a leading nonprofit research institute devoted to advancing veterans-health research – was the sixth annual meeting of the national conference, which focuses on the neurological and psychological wounds of war.

UCSF researchers for years have been leaders in identifying and exploring the mechanisms of brain trauma and posttraumatic stress, and are at the leading edge in exploring new treatment strategies for these chronic afflictions.

Mental Training Through a Computer Game

It used to be thought that the brain’s wiring scheme – its nerve circuits – did not change appreciably in adults.

But scientific evidence now shows that connections within nerve circuits can in fact become stronger or weaker with time to reflect new experiences, favoring the flow of signals through new and different pathways. For instance, in one seminal study, a memory-associated brain region called the hippocampus grew larger in London cabbies after they trained to learn the city’s streets. 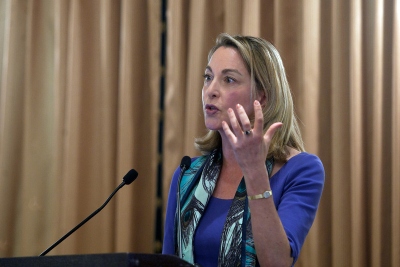 Signaling through nerve circuits connecting different parts of the brain underlies all of our thoughts, emotions and memories. The possibility of influencing the brain to reconfigure itself in beneficial ways is a major motivation behind the research of Sophia Vinogradov, MD, a UCSF professor of psychiatry and chief of the mental health service at the SFVAMC.

Vinogradov has focused her research on schizophrenia, which causes people to have diminished cognitive functioning, including a diminished ability to process verbal and other auditory information normally.

Vinogradov and her UCSF colleagues have worked with software that in preliminary studies helped individuals diagnosed with schizophrenia to better distinguish between imagined and real events.

In the reality-monitoring training, participants completed simple sentences, such as “The chicken crossed the road.” The final word of each sentence was either presented by the scientists, or it was left blank for subjects to make up and fill in themselves.  Then, 45 minutes later, participants had to identify whether the second word in the noun pair was a word they provided or one presented by the experimenter. After weeks of training sessions, as the performance of participants improved, patterns of signaling in their brains changed to become more normal.

Mental illnesses are the result of dysfunction in interacting brain networks, and evidence shows that networks can be modified, Vinogradov said. In most cases, drugs will not accomplish the needed modification, but retraining the brain may have greater potential to do so, she said.

Attendees gather at the Marine Memorial Club for the “Brain at War” symposium.

There is no reason that similar strategies couldn’t be adapted to help veterans with the mental health challenges they often face, according to Vinogradov.

“In depression and in post-traumatic stress, the brain pays too much attention to negative information and filters out positive information,” she said.

In her most recent research, Vinogradov is bringing together cognitive scientists and people from the entertainment industry to develop new tools, including smartphone apps, to actively target addictions, traumatic brain injury and post-traumatic stress.

In addition, Vinogradov is conducting research to better understand the nerve networks that play a role in suicide, the leading cause of death among U.S. men and women in active service in the Middle East.

“We get the basic principles, and we’re beginning to apply them,” she said. “We’re headed in the right direction.”

One of the symptoms of post-traumatic stress is “an exaggerated sensitivity to threat,” according to Aoife O’Donovan, PhD, another symposium speaker.

To help veterans cope with anxiety brought on by perceived threats, O’Donovan, an assistant professor of psychiatry at UCSF who also is affiliated with the mental health service at the SFVAMC, developed a smartphone app aimed at desensitizing their brains to threatening words.

O’Donovan and colleagues at the SFVAMC and UCSF, including Vinogradov and psychiatrist Thomas Neylan, MD, worked on the app to eliminate “attentional bias,” the tendency for the brains of posttraumatic stress sufferers to pay too much attention to stimuli that are not really threatening.

When we feel threatened, emotional systems become activated. Heart rate and blood pressure increase –  even the immune system is affected. Although a physiological response that helps us act quickly might be life-saving in a real battle, it is harmful when it is activated routinely in the absence of any significant threat. 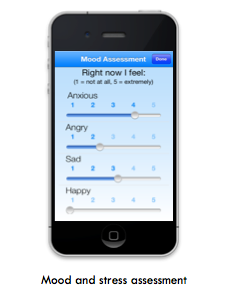 The smartphone app developed by Aoife

O’Donovan and her colleagues includes a

psychological assessment of users to gauge

their mood and stress level while playing

The perception of threat also can lead individuals to act angrily or even aggressively. This hyper-vigilance is associated with sleep disturbances that can worsen other post-traumatic symptoms, fueling a vicious cycle, O’Donovan said.

Smartphone health-related apps – except for the few regulated as medical devices – are not required to undergo FDA scrutiny to assess their value, but O’Donovan developed her new app based on scientific studies that demonstrated the value of a similar approach in alleviating anxiety.

Users of the app play a game in which they try to quickly track a target after words likely to be perceived as disturbing or unpleasant flash on the phone screen. Over time, users may become desensitized to the disruption presented by the threatening words.

By retraining the brain’s nerve circuits in this way, study coordinator Ashkan Ahmadian hopes that PTSD sufferers will become less reactive. “When they perceive a threat, they may then be able to control their attention and optimize their response,” he said.

Alzheimer’s disease not only is a growing problem among the entire U.S. population, but it also disproportionately affects war veterans, said Michael Weiner, MD, director of the Center for Imaging of Neurodegenerative Diseases at SFVAMC.

To push potential new treatments for Alzheimer’s – and ultimately for other brain diseases and injuries – Weiner is launching a new Internet-based brain research project, called The Brain Initiative. The project aims to speed recruitment of clinical trial participants by creating a registry of seniors and others at risk for cognitive decline..

Through the initiative, Weiner’s team is partnering with Lumosity, a company best known for developing online computer games aimed at improving brain function and that claims more than 40 million users.

Participants in The Brain Initiative log into an online portal, provide informed consent, complete questionnaires and periodically take online neuropsychological tests. Researchers seeking study participants eventually will have access to this data – without patient-identifying information – to be used in recruiting patients for studies.

The rate of cognitive decline monitored online can serve as a predictor of future cognitive decline, and help identify those who might benefit the most from effective experimental treatments, according to Weiner.

Participants, especially those who are found to be experiencing cognitive decline over time, would become part of a motivated pool that could be tapped to see if they want to participate in clinical trials.

One potential issue is that researchers cannot monitor the testing environment of online participants at home, but the benefit of the online forum is great: “The beauty of it is that you can get so many more people to do it,” Weiner said, adding that traditional, in-person enrollment can slow studies and make them more costly.