A common belief is that our modern, stimulation-filled environment encourages individualistic behavior (or anti-social behavior, depending on one’s point of view), while simpler surroundings give rise to a more developed community life. New research at the Weizmann Institute shows that this assumption – at least for mice – is based in reality: Mice that have been raised in a stimulus-rich environment have less complexity in their social interactions than those growing up in more Spartan conditions. The findings were based on two innovative developments: The first is an automated system that continuously tracks groups of mice living in semi-natural conditions; and the second is a mathematical framework for analyzing the data, which enabled the scientists to characterize, in detail, the nature of the mice’s collective behavior.
The research, which appears Tuesday in the scientific journal eLife, was a collaborative study between two very different groups in the Institute’s Neurobiology Department. Prof. Alon Chen is an experimentalist whose work deals with molecules in the nervous system that affect behavior, while Dr. Elad Schneidman is a theoretician who works on the nature of collective behavior in large groups of neurons, and other biological systems. The experimental system created by the team, which included Drs. Yair Shemesh, Oren Forkosh and Yehezkel Sztainberg, and Tamar Shlapobersky, was a large “arena” containing points of interest – sleeping nests, stations for food and games, and more. The research team tracked the mice over four nights running, recording everything under ultraviolet lighting so as not to disturb the mice’s normal nocturnal routines.
With four mice mainly visiting 10 regions of interest in the arena, the number of possible situations totals 10,000. But the researchers soon noted that the relations between the mice limit these configurations. A theoretical calculation based on each mouse’s individual likes and fears yielded 4,000 possible arrangements, but only around half of these actually occurred. 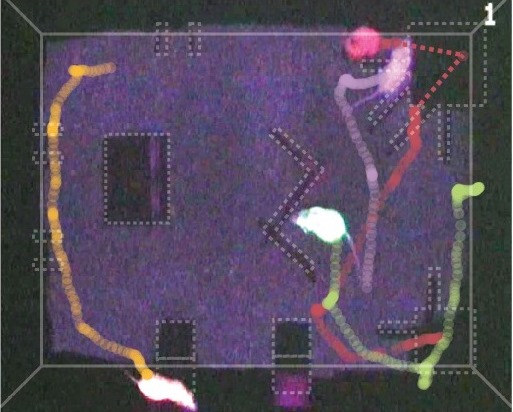 How much of the mouse behavior was based on interpersonal relationships? One way to check this is to ask to what extent the information on the location of a particular mouse will allow one to determine the location of another mouse. When the scientists carried out this calculation for pairs of mice, only 5% of the uncertainty about the location of one mouse could be ‘read’ from that of another. When they included all the other mice in the arena in their calculations, their success rate increased five-fold. But that still meant that 75% of what determines a mouse’s location has nothing to do with social relationships, and is simply an issue of individual preference.
To evaluate the relative weight of individual personality traits versus social dependence, the scientists employed a mathematical model from statistical physics called the “maximum entropy model,” which is applied in many different types of research to analyze data on relationships in complex systems with minimal reliance on initial assumptions. In this case, they analyzed the importance of relationships of different orders – from the first order in which a single mouse acts independently of the others, through the second order of paired relationships, and on to third- and fourth-order relationships.
In nearly all the systems analyzed with this model – including neuronal and protein networks – almost all contributors to group behavior of the system come from paired interactions. Mouse social activity seems, on the surface, to be pair-based: chasing, approaching, fighting, etc. Yet, surprisingly, the team found that third-order relationships carried around a third of the weight of the group behavior. Why are these mouse interactions different from other biological networks? The scientists suggest that complex social structures evolved for survival and, along with them, the social species developed ever more sophisticated mechanisms for dealing with the intricacy of these structures.
The evolution of social structures brought the scientists around to the question of environment: How does the environment in which the mice are raised affect the social structure? To answer the question, the research team compared two sets of mouse groups, one set was raised with a large selection of stations and toys; the other in standard lab conditions. Analysis with the mathematical model revealed a significant difference: Mice that had grown up in the complex environment engaged in less of the appropriate social activity, and their group behavior was much more dominated by pair relationships than triple ones. In contrast, not only did the second, standard groups exhibit more complexity in their social structure, they even advanced in “sociability” over the course of the experiment, while the first groups did not. The difference, say the scientists, might arise because a rich society enables more individualism and reduces the need for dependence on the group. On the other hand, the more complex environment might encourage aggression and dominance, which are more connected to paired relationships.
This research system – highly sensitive to the details of social structure and based on sophisticated tracking techniques and methods adopted from molecular biology – may open a wide variety of new research possibilities. Some questions Chen and Schneidman plan to ask: How do mutations in various genes affect social behavior? What about the behavior of mice that overproduce such hormones as oxytocin (the love hormone) or testosterone? Do mice with the behavior patterns of autism or schizophrenia function better in certain environments? How do groups of mice learn in a group? The present study paves the way to solving these riddles – and posing many more questions.
Weizmann Institute of Science