With Board Games, It's How Children Count That Counts, Say Carnegie Mellon and Boston College Researchers 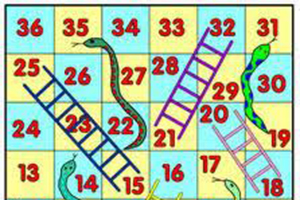 Games like Chutes & Ladders require players to count out the spaces as they move their tokens. Earlier studies have pointed to the benefits to young children of playing games that require counting.

Published in “Developmental Psychology,” the new study shows that numerical board games can be beneficial for learning the full range of numbers from 1-100, and thus extends previous studies that showed the benefits of playing board games to learn numbers from the 1-10 range. It also found that how the children count while they play is crucial.

“This study is important because it shows that parents can increase their children’s learning if they make a small change in the way that they play common number board games with them,” said Robert Siegler, the Teresa Heinz Professor of Cognitive Psychology at CMU who has demonstrated a variety of positive effects of playing numerical board games with young children.

The findings were published only a week after CMU launched the Simon Initiative to accelerate the use of learning science and technology to improve student learning. Named to honor the work of the late Nobel Laureate and CMU Professor Herbert Simon, the initiative will harness CMU’s decades of learning data and research to improve educational outcomes for students everywhere.

“We found that it’s the way that children count — whether the counting procedure forces them to attend to the numbers in the spaces of a board game — that yields real benefits in the use of numbers,” said Elida Laski, assistant professor of education at Boston College. “What’s most important is whether you count within a larger series of numbers, or simply start from one each time you move a piece.”

The researchers tested two counting methods in a study of 40 children who played a 100-space board game designed by the researchers to mimic products like Chutes & Ladders. In the first method, referred to as “count-from-1,” children started counting from the number one each time they moved a piece. In the other method, students would “count-on” from their latest landing spot in the game. So a child who had moved her piece 15 spaces would “count-on” beginning with 16 during her next move.

The process of counting-on allows children to develop their ability to encode the relationship between numbers and spaces. That, in turn, improved their abilities to estimate the size of numbers on number lines, identify numbers and to count-on.

In a second experiment, the researchers found that students who practiced encoding numbers 1 through 100 via methods beyond a board game showed no appreciable gain in number line estimation.

The new results suggest that simply playing board games may not yield improvements in counting skills. Instead, parents and teachers need to direct children’s attention to the numbers on the game boards to realize those benefits.

“Board games help children understand the magnitude of numbers by improving their abilities to estimate, to count and to identify numbers,” Laski said. “But the benefits depend on how children count during the game. By counting-on, parents and their children can see some real benefits from board games. It’s a simple way to enhance any game they have at home and still have fun playing it.”

Games like Chutes & Ladders (board pictured above) require players to count out the spaces as they move their tokens. The new study by researchers from CMU and Boston College shows that these kinds of numerical board games can help kids learn to count to 100.