Professor Mary Chambers said that, although the challenges faced by countries when trying to improve quality of care for people with mental health issues often differed, there was a great deal of common ground and sharing ideas could be hugely beneficial.

“It is critical to exchange knowledge across borders and learn from each other’s experiences,” Professor Chambers, from the Faculty of Health, Social Care and Education at Kingston and St George’s, said. “International collaboration on research into mental health issues is also vital as it allows us to address challenges from different cultural perspectives and develop appropriate responses.”

During the past five years, Professor Chambers has jointly led the development of the international online education and training resource ePsycheNurse.net for mental health nurses. Drawing on experiences from nine European countries – England, Finland, Germany, Ireland, Italy, Lithuania, the Netherlands, Portugal and Switzerland – the project aims to give nurses the therapeutic tools to manage distressed and disturbed people in psychiatric hospitals and inpatient units sensitively and effectively, with safety and dignity paramount. 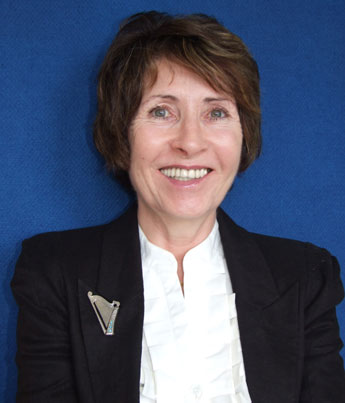 The study began by looking at nurses’ attitudes towards mental illness and pinpointed differences between countries. “Portuguese and Irish nurses had a more positive attitude towards service users while Lithuanian nurses tended to take a slightly more authoritarian approach to care,” Professor Chambers said. “This information enabled us to develop training packages specifically tailored to each country’s needs.”

The project was piloted in London and Finland and subsequently adopted by the Scandinavian country. The research had shown Finland had leaned towards a more formal approach to mental health nursing, with people in psychiatric hospitals who became very agitated or disturbed sometimes restrained using straps or placed in seclusion, Professor Chambers explained. She worked with academics, mental health professionals and service users in the country to develop an online curriculum to address these issues.

As part of the training, nurses were able to interact with virtual patients, developed with input from mental health service users, to practice responding to real-life clinical scenarios. The use of restraint tools such as straps has now been completely eliminated and the number of instances of people being placed in seclusion has been significantly reduced from 300 to 30 per year in Finnish hospitals in which the training has been implemented.

Professor Chambers has also been sharing her expertise in other parts of Europe, addressing the 13th International Congress of Law and Mental Health in Amsterdam, and even as far afield as New Zealand where she delivered a keynote speech at the first Australasian Mental Health Nursing and Addiction conference in Auckland. She used the opportunity to outline how social values and attitudes towards mental illness had changed over recent years, with greater emphasis now being placed on individuals looking after themselves. This had implications for nurses and clinical leaders, meaning those using mental health and addiction services now had more opportunity to have a say in shaping their own care, she said. However, Professor Chambers also highlighted the stigma around mental health issues that existed among some health professionals as well the general public.

As a result of links made at the conference, Professor Chambers is now working with the University of Auckland to develop a research proposal looking at the implementation of Mental Health Acts in a number of countries and how the rules are interpreted by nurses. “We hope to get a better understanding of how clinical teams work together to make sure an individual is safe and secure and look at who holds the balance of power in decision making, particularly around things like detention,” Professor Chambers explained. “The crux of mental health nursing is personal relationships. When people become very distressed or disturbed it can be difficult to reason with them, but that is the skill of a mental health nurse. When situations do end up escalating, mental health professionals need to have the expertise to intervene in both an ethically sound and therapeutically effective manner.”