Barnes, who was a target for abuse from the terraces during his playing days in the 1980s and 1990s, said although such behaviour was less prevalent now, that did not mean it had died out altogether. “From bananas being thrown on the pitch to overt racist chanting – just because we’re not hearing it any more, the nature of racism hasn’t changed,” he said. “For 90 minutes people aren’t allowed to say or do certain things, but that doesn’t mean it’s gone away. And the more we believe that it has, then the bigger the danger is. “

Jamaican-born Barnes, 50, played for Liverpool from 1987 to 1997, making 407 appearances and scoring 108 goals during a period in which the team won two league titles and the FA Cup. He was voted the fifth greatest player in club history, with the official website proclaiming: “The number 10 shirt will forever belong to Barnes”. He also played for Watford and Newcastle, made 79 appearances for England, played in the 1986 and 1990 World Cups and was twice winner of the Football Writers’ Player of the Year award. But as well as being idolised for his footballing ability, he was on the receiving end of some vicious racial abuse and it was this experience that formed the core of his talk to students. Although its title was Overcoming Racism in Sport, his address turned out to be even more wide-ranging. “Overcoming racism in sport? Simple – be successful, end of story,” Barnes said. “But in society at large? That’s much harder – and we have to focus on that before we can concentrate on any one area such as sport.”

Since retiring, Barnes has had two unsuccessful spells in club management at Celtic and Tranmere. Although he still admits to holding managerial ambitions – under the right conditions – he now works extensively as a media pundit, largely in South Africa. He is also in demand as a speaker, but as the content of his extremely honest and far-reaching Digger Barnes blog suggests, anyone expecting the usual string of retired sportsman’s career anecdotes is in for a surprise. 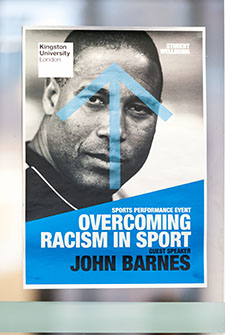 Commonly-suggested measures offered up for combating racism, such as banning orders and fines, totally missed the point, Barnes said. Much of the problem, he went on, was caused by unconscious racism which existed in almost every member of society. “Of course there are physical differences between different groups of people,” he said. “Look at the Olympics 100m final – most of the runners will be black and a lot of them will be from Jamaica, but it’s the idea of racism from an intellectual and moral point of view that we really need to fight.”

Racism was based on what people had been told about one another for the past 300 years, he added. “If you look at what history has shown us for years – wrongly – it’s that a certain group is intellectually and morally superior. I really want to change things and only through people understanding why they think and speak the way they do will that happen,” Barnes said.

Even though there had been high profile black footballers in England before Barnes, he became a particular target for abuse. But, as he revealed, it had no impact because it never occurred to him that he was the victim. “I never had to bite my tongue,” he said. “I came to England when I was 13 and people started racially abusing me on the pitch, but I didn’t realise it was aimed at me, so I didn’t pay attention. If people want to make monkey noises at me or throw bananas – I don’t think I look like a monkey, and I know I’m not one, so it didn’t affect me at all.”

In his playing days, Barnes was someone who stood apart from the crowd with his remarkable skill. Now in his retirement, his strong opinions and enthusiasm for sharing them also mark him out as not being just another former footballer. He still feels a duty to defend the game, which has given him the opportunity to share with the next generation of talented athletes on the sports performance programme.

Society absolved itself from responsibility Barnes told students, if it said the mainstream was all right and it was just football that had the racism problem. “The big question is, are we interested in getting rid of it or just not hearing it? Because if we focus on making sure we can’t hear it, that changes nothing. The only way we can get rid of discrimination is through education and explaining why we are the way we are,” he said. “If you get bitten by a snake, you need to find out what type it is to treat the bite properly. You can’t just deal with the symptoms of the venom, you need to know the cause, or it’ll come back. It’s the same with racism. We need to understand the cause and why it exists – then we can treat it.”

Sports development manager Jo Heath said hosting such high-profile visitors was extremely motivational for students. “The programme aims to provide support for all of Kingston’s talented athletes as they balance a sporting career with their academic studies,” she said. “Having such inspirational figures come to talk to them and offer advice insight, experience and motivation really contributes to our role helping them realise their goals.”