The research, led by INSEAD Professor Roderick Swaab, showed that the presence of too many individuals with top talent can undermine players’ willingness to coordinate, which can compromise effective teamwork and overall team performance. The findings also reveal, however, that most people assume the opposite, believing that piling on more top talent is the key to team success. 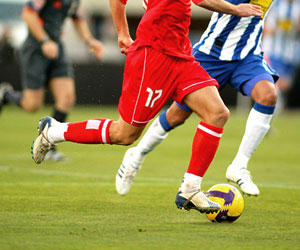 “Most people believe that the relationship between talent and team performance is linear – the more their team is packed with talent, the better they will do,” explains Swaab.

“Yet our latest research documenting a ‘too-much-talent effect’, reveals that for teams requiring high levels of interdependence, like football and basketball, talent facilitates team performance… but only up to a point. Beyond this point, the benefits of adding more top talent will decrease and eventually hurt the team performance because they fail to coordinate their actions.”

The research indicates that the too-much-talent effect only emerges in sports that require a high level of interdependence between players. For more individualistic sports, such as baseball, very high levels of talent do not seem to hurt performance.

So, while Miami Heat fans may currently be rejoicing in their “big three” — LeBron James, Dwyane Wade and Chris Bosh — the team of researchers cautions Miami fans not to forget the Heat’s NBA title loss to the Dallas Mavericks in 2011, a team built around one star player — Dirk Nowitzki — and a number of lesser-known sportsmen. While the Mavericks were successfully complementing each other’s strengths, Miami’s newly acquired superstars were jostling for the spotlight, and paid the price.

“As the FIFA World Cup 2014 draws near, we expect to see plenty of team-sheets boasting impressive lineups with top talented players,” says Swaab. “However, coaches that simply select their side with superstars may, contrary to popular belief, be the ones taking an early exit from Brazil!”

While team managers from the World Cup, NBA, and MLB may do well to bear these findings in mind, lessons can also be taken to the boardroom.

“Like sports teams, teams in organizations vary in their levels of interdependence. When team success merely depends on the accumulation of individual performance (e.g. sales teams), hiring and staffing could simply focus on getting the most talented individuals on board,” Swaab explains. “However, these same strategies can hurt a willingness to coordinate effectively when team success depends on high levels of interdependence (e.g. strategy teams). When interdependence between team members is high, organizations could either hire a better mix of top talent and non-top talent and/or invest more in training to formalize roles, ranks, and responsibilities.”

“These are important lessons,” says Swaab, “because selection decisions in organizations tend to produce a too-much-talent effect because of misguided perceptions around the link between top talent and performance.”

The research was conducted using data from the FIFA World Cup 2010 and 2014 qualifying periods and the 2002-2012 National Basketball Association (NBA) and Major League Baseball (MLB) seasons. The research identified individual talent using individual elite club affiliations in football, Estimated Wins Added (EWA) in basketball, and Wins Above Replacement (WAR) in baseball. This, along with an unparalleled amount of information, including on-court intrateam coordination data, allowed measurement of team performance in relation to the amount of talent on the books.

The complete Open Practices Disclosure for this article can be found at http://pss.sagepub.com/content/by/supplemental-data.