Home » Mental Health & Behavior » The myth of self control 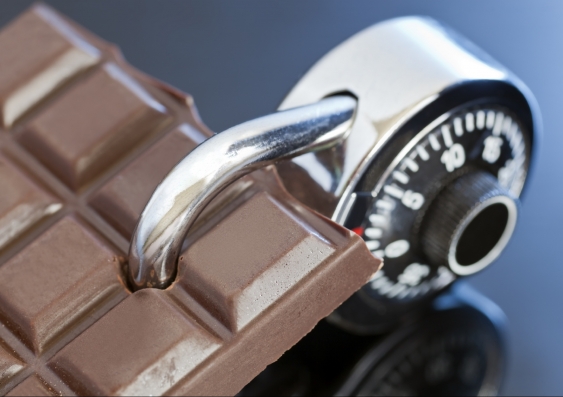 How many times have you heard somebody say they can‘t possibly eat more than one small square of chocolate because “it’s so rich”? Surely they could manage more, you think, as you scoff down the entire packet.

Conventional wisdom says willpower improves with practice, much like a muscle strengthens when used. Studies show people can improve their willpower at any age if they keep practising self-control. That is, keep saying no.

Even so, studies also show we’re more likely to fail when our emotions are heightened and more likely to succeed if we plan ahead, particularly if we’re prone to acting on impulse.

So is eating well as simple as making a decision to avoid “bad” food? According to UNSW research, the answer is yes… and no.

Eating healthily is also about the volume of food we eat. And this is less about self-control and willpower and more about who – and what – is in our orbit at the time the food is on the table.

How much food we consume depends on many factors: Our mood, whether or not food is within reach and, perhaps most importantly, with whom we’re sharing our meal.

“There are lots of situations where we don’t really know how much we’re supposed to eat, what’s appropriate from a nutritional perspective or what’s socially appropriate. In those situations we rely on cues to guide us,” he says.

For example, when is it safe to say yes (or no) to a second helping? “We look at other people and say ‘well if that person’s eating a lot I guess I should be eating a lot too’.”

These social influences can override how tasty an individual food might be and even how hungry we feel.

There’s also what’s known as the Portion Size Effect. In 2013, Vartanian demonstrated that people given large servings of food eat more than those given smaller servings, even if they had been taught about the impact of portion size on consumption.

“It’s not the case that some people just control themselves better,” Vartanian explains. “Research shows that if you are served a larger portion you will eat more, even after you’ve been taught about the impact. This applies to virtually everybody.”

In his landmark study, published in the Journal of Health Psychology, a group of 96 women were served either a 350 gram portion of macaroni pasta with tomato sauce, or a 600 gram portion.

One group was given a brochure about how external factors, such as mood, advertising, portion size, and social and cultural influences can contribute to overeating, and then asked to write about how these factors had influenced their food intake in the past.

Those in a separate group were also taught how to focus on the internal sensations such as the taste of food and feelings of hunger and satiety, before they were offered the pasta.

“Neither of these brief exercises reduced the effects of portion size. Overall, participants in the larger portion group consumed about a third more pasta – 69 grams – than those in the smaller portion group, ” Dr Vartanian said at the time. The difference was about 87 calories, or 365 kilojoules, of extra energy.

A recent meta-analysis confirmed the findings: If you double the portion size, people increase their intake of food, on average, by 35%.

Vartanian says his current research is looking more closely at the phenomenon. “We’re trying to understand two questions – are people aware of these external influences on their food intake, and secondly what are the underlying mechanisms?”

While portion sizes may influence how much we eat, it’s also true that some food – like chocolate and potato crisps – wield unnatural power. Would we still overeat if our plate were piled high with broccoli or we were offered a fourth or fifth stick of celery?

Unlikely, says UNSW psychologist Dr Amy Reichelt. “Basically, we overeat junk food because it activates the pleasure and reward centres of the brain that cause us to crave them more.”

In research carried out last year under the leadership of UNSW Professor of Pharmacology Margaret Morris, Reichelt demonstrated that eating junk food inhibits interest in healthy food and overrides the mechanisms in the brain that normally protect against overeating.

Humans succumb to junk food in similar ways, Reichelt says. For example, we see an ad for fries, remember the last time we ate it and how good we felt, and we go looking for that sensation again.

“We show a preference for these sugary and fatty foods, not only because they are energy dense, but because our brain releases certain neurotransmitters when they are eaten. These neurotransmitters include dopamine and serotonin, which are involved in pleasure and act as reward signals.

“So the brain reward system is ‘tuned in’ to attend to these sugary, fatty foods, and this leads to cravings that can increase consumption.”

But all is not lost. Research is beginning to show that we can also train our brains in as little as six months to want healthy food, and even to have our brain’s reward centres fire up when we see it.

“We want to find out whether or not exposure during this vulnerable adolescent period is going to change behaviour in later life,” Reichelt says. And what changes, if any, can be observed in the brain.

Regardless of the results, it’s becoming clearer that what marks people as masters of their diet has less to do with “self control” and more to do with what they surround themselves with.

And here, Vartanian says, is where we all can take heart.

“The smart people set up their environments in such a way that they avoid being exposed to these temptations in the first place, rather than being really good at resisting temptation in the moment.”