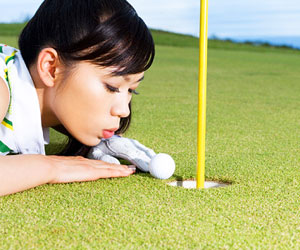 “Whether in sensational corporate scandals or more ordinary transgressions, individuals often violate ethical principles to serve their self-interest. Our results suggest that such ethical failures are mostly likely to occur in settings in which ethical boundaries are blurred,” the researchers of the study write.

Using an “ambiguous dice” paradigm, the researchers had participants look at a computer screen that displayed the rolls of a total of six dice, while their gaze was monitored using eye-tracking equipment. The participants were asked to report the number rolled for the die appearing closest to a designated target on the screen.

In one condition, participants were told that they would be paid according to the value they reported observing — thus, reporting a die roll of 6 would result in a bigger payoff than a die roll of 5. The participants could maximize their income by reporting a 6 for every trial, but then their cheating would be obvious and difficult to justify. The researchers hypothesized that participants would be tempted to cheat when they could justify their self-serving ‘mistakes’ by reporting having seen the outcome of the die roll that was actually second closest to the designated target.

In another condition, participants were told they would be paid for the accuracy of their report. Mistakes in this condition could only harm participants’ potential payout, so the researchers hypothesized that the value of the second closest die would not influence participants’ reports. This condition served to rule out other factors that could potentially lead people to misreport the rolls.

And data on eye gaze showed that a tempting value on the second closest die did grab participants’ attention on pay-for-report trials; in these cases, they spent relatively more time gazing at the tempting die and less time gazing at the nearest die.

In a second experiment, the researchers varied the distance between the nearest die and the target to see whether more ambiguous configurations — in which the target was very close to being in the middle between two dice — would lead to more self-serving mistakes.

Again, the data showed that the temptation of a higher number on the second closest die influenced participants’ reports when they were compensated according to the number reported rather than the accuracy of the report.

But the results also showed that ambiguity played an additional role in guiding behavior: Participants were more likely to report a tempting value from the second closest die when the target appeared relatively close to the middle than when it was clearly closer to the first die. As predicted, this effect did not emerge when participants were paid according to their accuracy.

“These results indicate that situations in which ambiguity is high are especially prone to self-serving interpretation of available information. If you seek to boost own or organizational ethical behavior – then reduce ambiguity and make things clear,” says Shalvi.

This research was supported by the Israel Science Foundation (Grant No. 914/14, awarded to S. Shalvi).

This article has received badges for Open Data, Open Materials, and Preregistration. More information about the Open Practices badges can be found at https://osf.io/tvyxz/wiki/view/ and http://pss.sagepub.com/content/25/1/3.full.