Firearm Shooting Errors Could Be Reduced Through Cognitive Training

People who have difficulty inhibiting responses are more likely to shoot unarmed civilians in simulated scenarios, but response inhibition training can help to reduce these shooting errors, according to new research published in Psychological Science, a journal of the Association for Psychological Science.

“Our findings indicate that shooting abilities can be predicted, in part, by cognitive abilities, and shooting performance can potentially be improved by cognitive training,” says psychological scientist Adam Biggs, who conducted the study as a postdoctoral researcher at Duke University and has since joined the U.S. Navy. “This research offers new potential in firearms training by approaching the problem — errors in firearm use — through new means.” 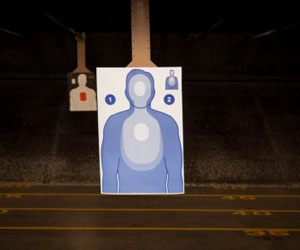 Participants came to the lab for an initial session, in which they played selected scenarios from the Nintendo Wii shooting game Reload: Target Down. In addition, they completed surveys that assessed symptoms of ADHD, autism, and their expertise and preferences in relation to video game playing. The participants also completed several computer tasks – including a go/no-go task and a stop-signal reaction-time (SSRT) task — aimed at identifying participants’ baseline levels of response inhibition.

A subset of 57 participants was randomly assigned to receive computer-based training aimed at improving either response inhibition or visual search abilities. The training groups had 1-hour training sessions on three consecutive days.

On the last day of the study, all participants returned to the lab for a final game-play session. In general, the scenarios tasked participants with clearing individual rooms by shooting hostile “bad guys” without hitting any civilians. Each room contained at least one unarmed civilian and three bad guys who pointed weapons at the participant, with a maximum of five civilians and nine bad guys in a given room.

Participants simulated shooting by squeezing the trigger on a handheld remote shaped like a pistol, and the remote then vibrated to indicate a shot had been fired. The game strongly reinforced the notion that civilians should not be shot: civilian shootings incurred a significant points penalty and players automatically failed the scenario if five civilians were hit during a single scenario.

The results showed that participants’ SSRT performance, which measured their ability to withhold an initiated response, was associated with the number of civilian casualties at baseline; that is, the worse a participant’s SSRT performance was, the more civilians he was likely to hit in the simulated scenarios.

Importantly, participants tended to shoot fewer civilians after undergoing response inhibition training, and the improvement was greatest for those who reported high levels of ADHD symptoms.

Participants who received visual search training showed no change in performance. The results suggest that improved response inhibition, and not a general training-related placebo effect, drove the improvement in shooting performance.

“Not only did we observe a link between cognitive abilities and shooting performance in a simulated environment, our first approach at cognitive training actually proved effective in reducing shooting errors during simulation,” says Biggs. “Further research will need to establish which aspect of the training proved most useful and how to enhance the training procedures, but it is an excellent first step!”

Although the research is in its early stages, the results have clear implications for potential use in military and law enforcement settings.