Missing piece surfaces in the puzzle of autism

Understanding the mechanisms that underlie autism spectrum disorders (ASD), which affect 7.6 million people according to the World Health Organization, is a major challenge. Characterized by heterogeneous symptoms and a multifactorial origin, this complex condition evolves during brain development. The scientists thus chose to study adult olfactory stem cells as indicators of the early stages of ontogenesis in order to determine new genes involved in this disease.  Easily accessible from nasal biopsies, these cells – which belong to nerve tissues and can differentiate into neurons – constitute an interesting model to identify the genes and proteins whose expression is deregulated in patients with ASD.

The team discovered that the gene coding for the MOCOS (Molybdenum Cofactor Sulfurase) enzyme was under-expressed in stem cells from nine out of eleven of the ASD adults studied. This under-expression was particularly interesting because although hundreds of genes have already been identified for their presumed roles in autistic disorders, each one alone can at best only explain 1% of cases.

Until now, the MOCOS protein was known for its role in purine metabolism, which notably leads to the production of uric acid. Through its involvement in this chemical pathway, MOCOS is thought to be active in the processes of immunity and inflammation, as well as in the destruction of free radicals, but until now it was not known to play a role at the cerebral level. The initial findings of the study nevertheless suggest that this enzyme may have other, as yet unknown, functions, so the scientists focused on the consequences of a deregulation of MOCOS synthesis.

The analysis of different tissues demonstrated MOCOS expression in the brain cells and intestine of several species, and notably the C. elegans worm and mammals. In these different organisms, under-expression of the enzyme induced hypersensitivity to oxidative stress (i.e. to the toxicity of free radicals), a smaller number of synapses and abnormal neurotransmission due to a reduction in the number of vesicles carrying neurotransmitters.

In view of the presence of MOCOS in many organs and its involvement in numerous biological and neurobiological functions, its dysfunction clearly corresponds to the heterogeneity of the symptoms that affect patients with ASD. The involvement of this enzyme in susceptibility to oxidative stress, which has frequently been observed in autistic children, its association with gastrointestinal diseases – which often accompany autistic disorders – and its role in nerve development and neurotransmission mean it is an ideal candidate for deregulation of its expression to lead to the abnormal brain development observed in ASD.

The aim now is to identify the molecules that regulate expression of this gene upstream, and those that interact with the enzyme, to understand their modes of action and determine how normal MOCOS expression could be restored. The possible involvement of this protein in other functions also needs to be clarified. The laboratory where this discovery was made is now planning to study mice presenting with defective MOCOS expression in order to analyze how the enzyme and its regulators influence the development of the nervous system. This new study should help to shed light on how the brains of ASD patients establish abnormal connections, while revealing new clinical and biological disturbances in these patients. This work therefore opens new pathways for research and provides an opportunity to understand the roles of MOCOS and its regulators. This should, in the longer term, lead to the development of therapeutic tools and new diagnostic methods. 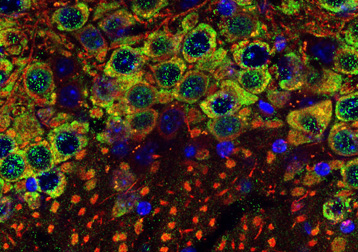 Image of mature neurons (in red) in the hippocampus expressing the MOCOS protein (in green), the enzyme involved in purine metabolism, oxidative stress and the formation of synapses.