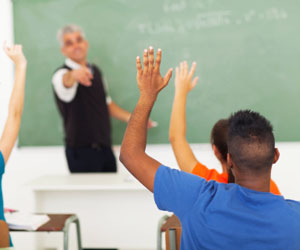 “Our results suggest that the whole effect of an intervention is more than the sum of its individual effects,” explains psychological scientist Joseph Powers of Stanford University, lead author on the study. “As a field, we’ve often focused on understanding and changing individual psychological processes, but these findings show that changing individual psychology can trigger important second-order effects with measurable benefits for everyone in the environment.”

The first study took place in 45 classrooms at the beginning of the school year. Participating students received a writing prompt from their teachers, who were not aware of the research hypothesis. The prompt instructed some students to write about their most important values, such as friends or artistic ability; these students were in the intervention group. Other students, assigned to the control group, received a prompt instructing them to write about their least important values. After about 15 minutes of writing, the students placed their responses in envelopes, which were collected by their teachers.

On average, about half of the students in each classroom participated in the study. Importantly, the students believed that the exercise was a typical writing assignment for class.

Previous research by members of this team found that writing about their most important values at the beginning of the year helped insulate students from negative stereotypes about their racial groups and thereby boosted the grades of African American students but not those of White students, as the researchers had predicted.

The second study, conducted with a separate group of 7th graders in 15 different classrooms, confirmed these findings. And further analyses revealed that the classroom improvement effect was not influenced by various individual- and classroom-level factors, including student race, student intervention condition, and teacher team, in either study.

The researchers were surprised by the strength of these emergent effects, which were as large as or even larger than the direct effects that triggered them:

“It really makes you wonder how often we underestimate the full impact of social interventions,” says Powers.

Powers and colleagues plan on exploring these effects further to investigate the mechanisms that drive these emergent effects and the conditions that may limit them. They posit that the intervention may lead to strong indirect effects by strengthening classroom norms of cooperation, order, and growth in ways that benefit all students in the class.

This research was primarily funded by grants from the National Science Foundation (Research and Evaluation on Education in Science and Engineering division Award ID 0723909), the Spencer Foundation (Award 200800068), the William T. Grant Foundation, and the Russell Sage Foundation (Award 87-08-02). Additional support was provided by the Nellie Mae Education Foundation and the Institute for Social and Policy Studies of Yale University.