In this process, stem cells in the intestine replace cells of the gut epithelium which have been lost due to injury or normal wear and tear by new cells. Scientists of the German Cancer Research Center (Deutsches Krebsforschungszentrum, DKFZ) and Heidelberg University have now discovered, jointly with colleagues of the Fred Hutchinson Cancer Research Center in Seattle, that the cellular EGFR signaling pathway plays an important role in this process: It stimulates stem cells to divide so that their daughter cells replace the damaged intestinal epithelium. This signaling pathway may also be involved in the onset of human intestinal cancer. 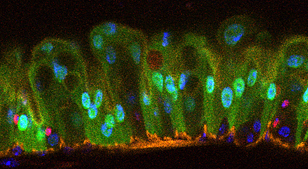 Section through the intestine of fruit fly Drosophila (fluorescence microscopy): The intestinal epithelial cells are green with blue-green nucleus; the stem cells of the intestine are recognizable for their dark-blue nucleus.

The investigators have used the fruit fly Drosophila for their experiments. This insect regularly renews its intestinal epithelium with the aid of stem cells, just like man. The researchers used genetic methods to induce death of cells of the intestinal lining or fed the toxic bacterium Pseudomonas entomophila to the animals. In this way, they specifically induced self-renewal of the intestinal epithelium. The gut lining cells under attack produced an increased amount of mediator substances which activate the epidermal growth factor receptor, or EGFR for short. There was a parallel increase in the activity of the cellular EGFR signaling pathway in the intestinal stem cells.

In a next step, the investigators are now planning to uncover how the EGFR signaling pathway is switched on in stem cells, in order to understand exactly what it is that causes stem cells to replace lost tissue.

Biologist and cancer researcher Bruce Edgar has recently been awarded a European Research Council Advanced Grant of 2.6 million euros for his work.

A picture for this press release is available on the Internet at:
www.dkfz.de/de/presse/pressemitteilungen/2011/images/Drosophila_Darm.jpg

Picture caption: Section through the intestine of fruit fly Drosophila (fluorescence microscopy): The intestinal epithelial cells are green with blue-green nucleus; the stem cells of the intestine are recognizable for their dark-blue nucleus.