Researchers combed through dozens of molecules in the blood of patients who had participated in the Framingham Heart Study. Image courtesy of ©iStockphoto.com/Mark Hatfield 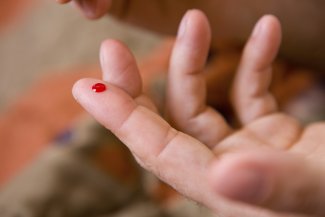 A person with type 2 diabetes can no longer naturally produce enough of the hormone insulin to keep blood sugar levels at bay and is at risk of serious medical complications, including stroke, kidney disease, and heart disease. But a diagnosis of diabetes is not the first sign of metabolic distress – there may be many molecular anomalies long before the onset of disease.

To find these early predictors of diabetes, researchers at the Broad Institute, Massachusetts General Hospital (MGH), and elsewhere combed through dozens of molecules in the blood of patients who had participated in the Framingham Heart Study in which participants are followed over many years (read more about this search in a Project Spotlight here). Beginning with blood samples collected from non-diabetic individuals during a baseline exam, the scientists compared molecules found in the blood of close to 200 patients who would go on to be diagnosed with diabetes 4-12 years later to blood samples from their counterparts who would not. These studies revealed two types of molecules whose levels can accurately forecast a person’s risk of diabetes. These measurable indicators, known as “biomarkers,” can predict the risk of developing diabetes, above and beyond known risk factors such as weight, age, and insulin and cholesterol levels.

“We set up this study to exquisitely match cases and controls – people who go on to develop diabetes and those who don’t – based on age, body mass index, and all of our best predictors,” said Robert Gerszten, a senior associate member at the Broad Institute and director of Clinical and Translational Research at the MGH Heart Center. “That’s how we found these metabolites: they added information on top of all of the standard clinical risk predictors.”

Gerszten worked closely with Clary Clish, the Broad’s director of Metabolite Profiling, and colleagues at the Broad Institute and MGH to analyze the samples using emerging technologies that can assess a large number of molecules in a short period of time. Clish’s group analyzed approximately 800 samples, looking at the blood from almost 400 participants both before and after a glucose tolerance test, during which a patient is given a standard amount of the simple sugar glucose.

When the researchers got their first glimpse of the data, they immediately noticed an interesting pattern emerging. “I remember sitting down with Robert and looking at the statistical analysis [from the amino acid study] and thinking, ‘It’s all the greasy ones,’” said Clish.

By “greasy” Clish meant the amino acids – or protein building blocks – with side chains that repel water. These are known as branched-chain amino acids (because of the offshoots of carbon sprouting from them) and aromatic amino acids (containing many-sided rings of carbon). Five of these amino acids were at elevated levels in the blood samples of participants who would go on to develop diabetes. The researchers report these findings in a paper published this week in Nature Medicine.

Gerszten and colleagues also tested the levels of lipids – fatty, waxy molecules such as cholesterols and triglycerides. The researchers found a lipid “signature” that predicts risk of or protection from diabetes, which they described in a paper published online last week in the Journal of Clinical Investigation. When doctors measure triglyceride levels during routine physicals, they measure the total level of at least a dozen distinct molecules made of different combinations of three fatty acids and a glycerol. In the new study, the researchers separated these molecules out, looking at more than 40 distinct lipids. They found that certain triglyceride molecules tended to be in the blood samples of people who would go on to develop diabetes, whereas other triglyceride molecules more often appeared in blood samples collected from people who would not become diabetic. They also found a correlation between this signature and insulin resistance, a strong risk factor for diabetes that can be detected before the disease’s onset.

Although these molecules create a compelling profile that predicts risk of disease, there is not yet evidence to suggest that these amino acids or the triglyceride molecules are causing diabetes – they may simply be a symptom, downstream of the root cause of the metabolic problem.

“We looked at different populations and showed that these signals are somehow related to insulin signaling, but the exact molecular mechanism remains to be identified,” said Gerszten. “Is this the cart or the horse? We still don’t know – either way, it’s important information.”

The researchers plan to turn to the genome for answers. All of the participants in the Framingham Heart Study have also been genotyped – their genomes have been samples at hundreds of sites of common genetic variation. By comparing the genetic differences between the diabetic and non-diabetic groups, the researchers may find genetic clues that help account for differences in the participants’ metabolic profiles.