Study: Insulin fights inflammation and even small amounts of glucose trigger it in Type 1 diabetics

BUFFALO, N.Y. – A small University at Buffalo study has found for the first time that in Type 1 diabetics, insulin injections exert a strong anti-inflammatory effect at the cellular and molecular level, while even small amounts of glucose result in “profound inflammation.”

A study conducted by Paresh Dandona has shown that insulin injections have a strong anti-inflammatory effect in patients with Type 1 diabetes. 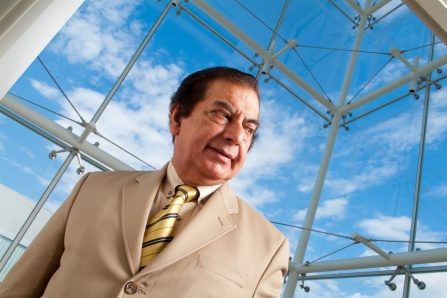 The findings show that in Type 1 diabetics, insulin has a powerful anti-inflammatory effect. This effect essentially suppresses the important pro-inflammatory protein called HMG-B1, which facilitates the synthesis of pro-inflammatory cytokines (messenger proteins) that induce even further inflammation when secreted and released by the injured cell.

The work builds on previous research by the investigators in the UB School of Medicine and Biomedical Sciences, which showed that insulin had the same anti-inflammatory effect in obese and Type 2 diabetes patients, but it highlights some important differences.

“The reason for this delayed response to insulin and glucose in Type 1 diabetes patients is not clear and requires further investigation,” says Paresh Dandona, MD, PhD, SUNY Distinguished Professor in the Department of Medicine; chief of the Division of Endocrinology, Diabetes and Metabolism in the UB medical school; and first author on the study. “It is possible that these patients have a more intense level of inflammation, which requires a greater effort to induce a change.”

“The infusion of small amounts of glucose, 5 grams per hour over four hours, leads to a profound inflammatory effect, including the generation of the HMG-B1 protein,” says Dandona. “Since 20 grams of glucose is the equivalent of just four teaspoonfuls of sugar, this has extremely important implications for Type 1 diabetics.”

According to Dandona, even relatively small and brief increases in glucose concentrations induce an increase in the expression of inflammatory markers, such as toll-like receptors (proteins that play a key role in the innate immune system) and others at the cellular and molecular level in Type 1 diabetics, because they have no insulin reserve.

“Our findings show that even a small amount of carbohydrate cannot be tolerated by Type 1 diabetics without the protection of injectable insulin even over a short period of time without the risk of inflammation,” he says. “This has profound implications for the severity of inflammation in patients with infections and in terms of taking insulin before meals.”

In the study, 10 Type 1 diabetics received either insulin infusions of two units per hour with 100 milliliters of dextrose per hour or just the dextrose, following an overnight fast. Blood samples were collected at intervals of zero, two, four and six hours after the infusions.

In the group that received insulin plus dextrose, markers of inflammation were suppressed and blood sugar readings stayed normal, at around 100 mg/dl (milligrams per deciliter).

But those who received just dextrose experienced a blood sugar spike from 115 mg/dl after fasting to 215 mg/dl at four and six hours, as well as an increase in the generation of key inflammatory markers. These include reactive oxygen species and several toll-like receptors, which may be involved in inflammatory processes, including gram positive and gram negative infections, metabolic inflammation as associated with obesity and diabetes and atherosclerosis.

“We were interested in these inflammatory markers in particular because although Type 1 diabetics are already being treated with insulin injections, they can be susceptible to infections and other inflammatory conditions, which lead to very serious, even life-threatening, complications, such as septicemia,” he said.

“Based on these observations, we are now beginning a study on meals taken with and without insulin in Type 1 diabetics, so that we can better understand what missing even a single insulin injection at mealtime means to a Type 1 diabetic patient,” he concludes.