Thomas J. Wang, M.D., director of the Division of Cardiology at Vanderbilt, along with colleagues at Massachusetts General Hospital and Boston University, report their findings in the October issue of The Journal of Clinical Investigation. 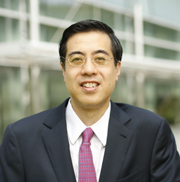 “From the baseline blood samples, we identified a novel biomarker, 2-aminoadipic acid (2-AAA), that was higher in people who went on to develop diabetes than in those who did not,” Wang said. “That information was above and beyond knowing their blood sugar at baseline, knowing whether they were obese, or had other characteristics that put them at risk.”

Individuals who had 2-AAA concentrations in the top quartile had up to a fourfold risk of developing diabetes during the 12-year follow-up period compared with people in the lowest quartile.

“The caveat with these new biomarkers is that they require further evaluation in other populations and further work to determine how this information might be used clinically,” Wang said.

The researchers also conducted laboratory studies to understand why this biomarker is elevated so well in advance of the onset of diabetes. They found that giving 2-AAA to mice alters the way they metabolize glucose. These molecules seem to influence the function of the pancreas, which is responsible for making insulin, the hormone that tells the body to take up blood sugar.

“2-AAA appears to be more than a passive marker. It actually seems to play a role in glucose metabolism,” Wang said. “It is still a bit early to understand the biological implications of that role, but these experimental data are intriguing in that this molecule could be contributing in some manner to the development of the disease itself.”

Future laboratory studies may determine exactly how 2-AAA regulates function of the pancreatic cells and how and when the body makes this molecule. One the clinical side, researchers might study how metabolism related to 2-AAA, which can be found in the diet, affect glucose metabolism in humans.

Type 2 diabetes is present in 5 to 10 percent of adults in the United States and is more prevalent among obese and overweight individuals, who comprise two-thirds of adults.

“Diabetes is common and the prevalence will only rise in coming years fueled by the rise of obesity. Understanding why diabetes occurs and how it might be prevented is a very intense area of investigation because of the serious consequences of having the disease,” Wang said. “It is certainly a focus of many research groups to understand how we might develop strategies to detect diabetes risk at an earlier stage and intervene.”