Damage to hands is not commonly associated with type 2 diabetes. We tend to think of the harm the disease does to feet and legs.  But new research from the University of Houston Department of Health and Human Performance found impairments in dexterity and sensory function in the hands of type 2 diabetes (T2D) patients. The study marks the first time such results have been documented in T2D population.

“It’s a very basic concept that no one’s looked at before. No one has examined what it is like if a patient living with type 2 diabetes touches an object compared to someone who’s healthy. Is it different? It really is,” said Assistant Professor and researcher Stacey Gorniak. “We’re not just seeing the traditional diabetic issues with the feet and the legs, but we’re actually seeing affects to the hands.  We found changes to the central nervous system that are not correlated with disease duration or disease severity, but simply due to the presence of the disease.” 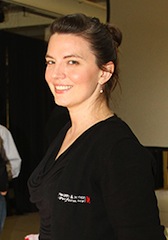 Type 2 diabetes is a disease that impacts nine percent of the Texas population. Much of the research on diabetic neuropathy—the nerve disorders, such as numbness, pain or tingling, caused by diabetes—has focused on the lower extremities. Gorniak, who studies how hand function is impacted by chronic health issues, conducted an evaluation of the fingertip and hand function in men and women. The battery of tests conducted include traditional clinical evaluations and also a video game-like computer program to measure how participants interacted with hand-held items.

Evaluations were conducted at the UH Center for Neuromotor and Biomechanics Research at the National Center for Human Performance in the Texas Medical Center.

Among her findings were declines in the dexterity of hands and fingertips of T2D patients when performing fine motor tasks and a decline in strength when gripping. Sensory evaluations also discovered small nerve fiber dysfunction in both hands. She says further studies may address the systemic changes associated with T2D, specifically an altered blood flow to the limbs and its impact on muscle tissue and motor skills.

“Interacting with an object changes with diabetes. This change impacts quality of life,” she said. “Brushing your teeth, feeding yourself, holding a phone and having a conversation, writing with a pen or pencil. These are all activities we take for granted.”

For more information on the UH Department of Health and Human Performance, visit http://www.uh.edu/class/hhp/

For more information on the UH Center for Neuromotor and Biomechanics Research, visit http://www.hhp.uh.edu/cnbr/#center-nbr