In his lab in Rowell Hall, new faculty member Eyal Amiel, is making discoveries about how the immune system works on the cellular level — research that could improve vaccine design. (Photo: Sally McCay) 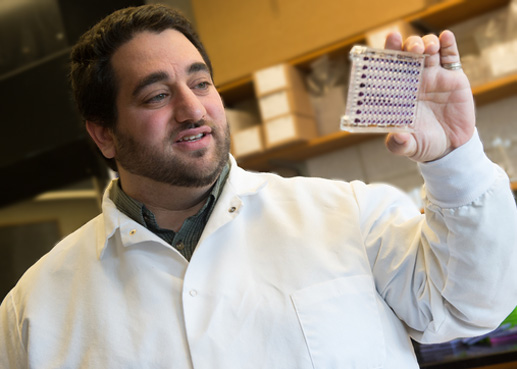 The paper’s focus is on dendritic cells, which are critical to the immune system; their function is to process antibody-generating materials, or antigens, and present them to T cells, which then shape the immune response. The paper considers the cellular upregulation of glucose, which maintains a cell’s energy but also creates fatty acids that are secreted by the cell as part of its immune activity. Together with his colleagues, headed by lead author Bart Everts, Amiel determined that the early consumption of glucose is vital to the activation of cells, in terms of the production and secretion of proteins that are essential to the cells’ immune function.

Amiel is already bringing the paper’s findings from mouse to human, having spearheaded a memorandum of understanding with the Champlain Valley Physicians’ Hospital in Plattsburgh, N.Y., which will provide his lab with human blood cell filters, a waste product. The lab will reverse flush the white blood cells out and fill them with cultures, allowing them to make new observations about the innate immune response in humans.

In retrospect, says Amiel, his initial resistance to entering the field was unfounded. As an undergraduate at Amherst College, the native of Israel, who had moved to the United States at age 4 and to Walden, Vt., at age 7, rejected the suggestion made by his academic advisor — who also taught immunology — that Amiel enroll in his course. With a focus on genetics, in particular slime mold, an organism that allowed him to study developmental regulation, Amiel would go on to graduate with a double major in biology and philosophy. The latter is evident in his ongoing ethical concern with using mice in his work, though he acknowledges that it’s a common struggle, and that there’s no real alternative as yet.

When he landed a job as a research technician at Dartmouth College, Amiel was surprised to find himself in the immunology laboratory, where he spent two years using his genetics expertise to profile the regulation of immunology genes. It was then, he says, that he realized that although basic science for science’s sake is important, “you have to justify the dollars spent in a way that makes sense for medical relevance, and the bettering of our society. Immunology is an easy subfield to do that.”

He stayed at Dartmouth to earn a doctorate in microbiology and immunology, where his work focused on the two categories of receptors and the relationship between them — signaling cells, essentially the “on” switch to the cell’s immune protection program, and recognition molecules that facilitate the engulfment of bacteria — and how they cooperate to bring bacteria to the surface. In a nutshell, he found that if you take away some of the interactions between the two, you can “push that fine balance of the immune system into problem areas like sepsis,” he says.

At New York’s Saranac Lake–based Trudeau Institute, Amiel undertook a postdoc project with Ed Pearce, in which he studied the metabolic regulation of dendritic cell activity. When dendritic cells are activated, they undergo fundamental changes in their use of nutrients, increasing dependence on sugar consumption. Specifically, he wanted to gain a fundamental understanding of why cells change their metabolism when they’re activated, whether that is necessary for their activation and what happens if it is modulated. The paper is one outcome.

“The power of these questions is that if we can understand the metabolic switch in both directions,” Amiel says, “then we could increase immune activity where we might want to — in, say, vaccines — or we could dampen it where that would be advantageous, as in autoimmune disease or hyper-inflammatory conditions where it’s toxic.”

Together with his wife — a Cabot native — and their infant daughter, Amiel arrived at UVM last August, drawn by the university’s “broad array of resources and opportunities for cross-departmental research collaborations.” In addition to running a lab, with one technician, a grad student, and six undergraduates, he is, he notes with a touch of irony, teaching undergraduate immunology.

As of early March, Amiel is also an affiliate member of the Vermont Cancer Center. In February, he received a patent for a method of producing activated antigen presenting cells and potential methods of using them in anti-cancer vaccines. He’s looked at the application of dendritic cells on a melanoma model in mice, and his lab is beginning research into glutamine, which shares many properties with glucose, but may be more important in governing what cells do.

One finding Amiel’s lab has made is that the activation of dendritic cells means a shortening of their lifespan, which they’ve determined is metabolically linked. By manipulating key metabolic pathways, Amiel says, they can toy with their activation and cell survival, something that could result in dendritic cells that have both longer lives and bigger immune responses than their normal counterparts, and would therefore be beneficial in mounting an immune response to a tumor.

“The immune system is constantly riding that fine line between how much protection we can have without too much collateral damage,” Amiel says, noting that the system is based on being toxic to the non-self. “It’s really that fine line that makes immunology so interesting.”