This phenomenon reduces the insulin sensitivity of enterocytes1 and increases the absorption of nutrients, thus exacerbating the disease. This work, carried out at the Centre de Recherche des Cordeliers (INSERM/UPMC/Université Paris Descartes) and the Institut de Cardiométabolisme et Nutrition (ICAN – INSERM/UPMC/AP-HP), is published on 18 June in Cell Metabolism.

Study of the mechanisms involved in human obesity is particularly interesting at the level of the jejunum, part of the small intestine that plays an important role in the absorption of lipids and carbohydrates.  Because of its location in the body, the jejunum is difficult to study, and its contribution to this metabolic disease was hitherto poorly understood. During their study, the scientists were able to collect jejunal tissue samples from patients during surgery to reduce their obesity and associated diseases (gastric bypass).  These samples from 185 severely obese patients were compared with jejunal samples from 33 lean individuals undergoing digestive surgery for other reasons.

The research teams coordinated by Edith Brot-Laroche and Karine Clément observed a state of chronic inflammation affecting the small intestine in the obese patients, and colonization of the jejunal epithelium by T lymphocytes whose density increased in proportion to the degree of obesity. These immune cells release cytokines2 that inhibit the insulin sensitivity of absorbent intestinal epithelial cells. Because the action of insulin regulates nutrient absorption and glycemia, this immune phenomenon thus contributes to worsening the clinical status of these patients.

Further clinical studies also demonstrated that in obese patients, an increase in the intestinal density of T lymphocytes is probably linked to complications associated with obesity, such as liver disease (NASH) and dyslipidemia3.

The results of this study also showed that the folds in the intestinal mucosa of the patients, or villi, were longer than those found in lean subjects. This means that the surface of exchange in the small intestine is increased by 250% (equivalent to two tennis courts) and that these patients absorb more nutrients. This phenomenon, due to a reduction in apoptosis – a cell death mechanism – also reinforces the inflammatory action of the immune system in this region, and aggravates the disease. 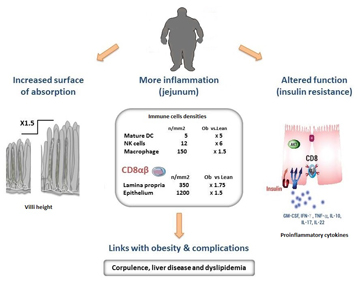 While insulin resistance in adipose, hepatic, pancreatic and muscle tissue had already been observed in obese patients, this work has highlighted the existence of similar mechanisms in the small intestine and opens the way towards the possibility of non-invasive therapeutic interventions that could reduce inflammation of the intestine and thus control obesity.

This project involved two teams from IHU-ICAN, two teams led by Edith Brot-Laroche and Armelle Leturque at the Centre de Recherche des Cordeliers and another headed by Karine Clément at Hôpital Pitié-Salpêtrière. It received support from ANR-ALIA Nutra2sense, the European Metacardis project, AP-HP clinical research schemes and the French government’s Investments for the Future program (ANR-IHU).