Dental microwear, the pattern of tiny marks on worn tooth surfaces, is an important basis for understanding the diets of fossil mammals, including those of our own lineage. Now nanoscale research by an international multidisciplinary group that included members of the Max Planck Institute for Evolutionary Anthropology in Leipzig has unraveled some of its causes. It turns out that quartz dust is the major culprit in wearing away tooth enamel. Silica phytoliths, particles produced by plants, just rub enamel, and thus have a minor effect on its surface. The results suggest that scientists will have to revise what microwear can tell us about diets, and suggest that environmental factors like droughts and dust storms may have had a large effect on the longevity of teeth. In particular, East African hominins may have suffered during dust storms, particularly from particles carried in by seasonal winds from the Arabian peninsula. 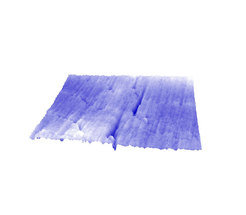 New research published by the scientists in Leipzig suggests that the main cause of the physical wear of mammalian teeth is the extremely hard particles of crystalline quartz in soils in many parts of the world. To show this, single particles were mounted on flat-tipped titanium rods and slid over flat tooth enamel surfaces at known forces. Quartz particles could remove pieces of tooth enamel at extremely low forces, meaning that even during a single bite, these particles could abrade much of the surface of the tooth if they are present in numbers.

In contrast, fossilized plant remains, so-called phytoliths, indented the enamel under the same conditions, but without tissue removal. The effect of the considerably softer phytoliths is similar to that of a fingernail pressed against a softwood desk. This kind of mark, called a rubbing mark, is visible but purely cosmetic.

The Max Planck Institute’s Amanda Henry provided the phytoliths for the study, and assisted in the interpretation. “This study suggests that phytoliths do affect teeth, but in a different manner than we previously thought,” she says. A new theory of wear, developed by collaborator Tony Atkins from Reading in the UK, suggests exactly what geometrical and material conditions are required for abrasive versus rubbing contacts. “People have not realized the vital importance of factoring fracture toughness into wear analyses” says Prof. Atkins. Study leader and Kuwait University researcher Peter Lucas says “we think that we’ve gone a lot further with the analysis of microwear than previous investigations because we realized that to uncover the mechanisms that cause it, you need to go one level smaller – to nanoscale. It is only then that the difference between relatively innocuous rubbing contacts and those that remove tooth tissues becomes clear.” The team could distinguish between marks made by quartz dust, plant phytoliths, and also by enamel chips rubbing against larger pieces of enamel.