Behaviors that relate to high testosterone might conflict with effective caregiving.
Credit and Larger Version 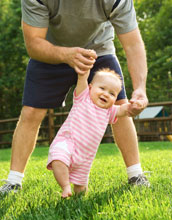 A new study in the Sept. 12 issue of Proceedings of the National Academy of Sciences says it is not just women who are biologically tuned for childcare; men are too.

The study’s finding that men’s testosterone levels are reduced after entering stable relationships and becoming fathers suggests that men, like women, are wired to shift their priorities as their social duties shift to caregiving and fathering.

“Fathers who are the most involved with physically taking care of their children have the lowest testosterone,” said Lee Gettler, a doctoral candidate in the Department of Anthropology at Northwestern University in Evanston, Ill., and lead author on the study. “What we see in our research is that men are biologically attuned to being caregiving parents and that they respond to the transition to fatherhood with large declines in testosterone.”

“It has been known for some time that fathers in many cultures have lower testosterone levels than non-fathers,” said Christopher Kuzawa, associate professor of biological anthropology at Northwestern and co-author of the study. “However, because past studies investigated these relationships as a single snapshot,” said Kuzawa, “they were not able to establish whether fatherhood lowers testosterone, or whether men who had lower testosterone to begin with were more likely to become fathers.”

The study was the first to follow a group of men through time to track changes in their hormones as they enter stable relationships and become fathers. Researchers surveyed over 600 men participating in the Cebu Longitudinal Health and Nutrition Survey, located in Cebu City, the Philippines. The National Science Foundation’s Biological Anthropology division in Arlington, Va. helped fund the research.

“The research speaks strongly to the complex and interesting interplay between biology and behavior in our species,” said Carolyn Ehardt, NSF physical anthropology program manager, “This includes the fascinating flexibility characterizing a very adaptive set of interrelationships between human physiology and social and cultural variation.'”

Gettler, Kuzawa and a team of scientists found that having high testosterone increased a man’s chances of entering a stable pair-bond and becoming a father. Afterward, these same men experienced a large decline in testosterone. The researchers found that testosterone levels were lowest among fathers who reported being highly involved in childcare for three or more hours per day.

The researchers suggest that it is possible that men with higher testosterone are more self-confident or competitive in some social or economic domains, making them more attractive to potential partners.  But once a partner is attained, testosterone declines, in part, because competitive or other behaviors that relate to high testosterone might conflict with effective caregiving.

“Humans are unusual among mammals in that our offspring are dependent upon older individuals for feeding and protection for more than a decade” said Kuzawa. “Raising human offspring is such an effort that it is cooperative by necessity, and our study shows that human fathers are biologically wired to help with the job.”

Gettler said the findings suggest that human male biology is quite flexible in its responses to social contexts, including how men relate to their partners and children. In fact, the study’s results showed that men who were married or entered stable partnerships but who were not parenting also experienced a decline in testosterone compared to men who remained single. The decline for this group was not as large as that for men who were newly partnered and new fathers.

“This suggests that entering a stable, committed relationship also involves a shift of social priorities that might be partly facilitated by reducing testosterone,” noted Kuzawa.

Something that came as a relative surprise to the researchers was the magnitude of difference between fathers of newborns and fathers of older children. Fathers of newborns, on average, showed almost double the decline in testosterone compared to fathers whose children were older at the time of hormone measurement.

“Although all fathers had lower testosterone than non-fathers, this finding in the fathers of newborns suggests that there is a large, temporary decline in testosterone soon after birth,” Kuzawa said.

“Fatherhood and the demands of having a newborn baby require many emotional, psychological and physical adjustments, and our study indicates that a man’s biology can change to help meet those demands,” added Gettler.

“Classic models of human evolution emphasized the role of men as hunters and providers, with the assumption being that mothers were responsible for childcare,” said Kuzawa. “Our findings challenge this model by showing that human fathers also are wired to care for their children.”

Thomas W. McDade of Northwestern and Alan Feranil of the University of San Carlos, Cebu City, Philippines, also contributed to this research.