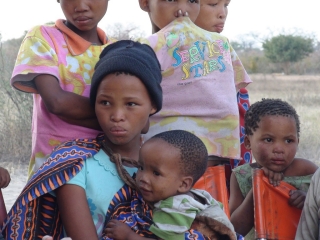 An examination of the immune genes of the southern African Khoe-San people has revealed a completely new kind of mutation, according to researchers at the Stanford University School of Medicine. The gene variant likely contributes to healthier babies, although the variant can also lower resistance to disease.

The findings grew out of a long-term effort by Peter Parham, PhD, professor of structural biology and of microbiology and immunology, to understand how immune system genes make us reject organ transplants.

A paper detailing the findings were published online Aug. 20 in PLOS Genetics. The gene variant was one of two they found that would be expected to alter the formation of the placenta during early pregnancy, leading to larger, healthier babies and a reduced risk of pre-eclampsia, a major cause of maternal death.

“Only a handful of studies have investigated the function of immune genes in African populations. As a result, we have probably greatly underestimated the breadth of human immune variation,” said Parham, the study’s senior author. “So we were excited to investigate the Khoe-San, a divergent, modern human population known to harbor enormous genetic diversity.”

Mutations can alter genes in all kinds of ways. A mutation can have no effect on how a gene operates, it can change functionality in minor or important ways, or it can completely destroy normal function. Geneticists have never seen this type of mutation before, the researchers said. Originating among the Khoe-San, the mutation does two things at once: It simultaneously turns off one function and turns on another, much like a railway switch, pushing gene function off one track and onto another. 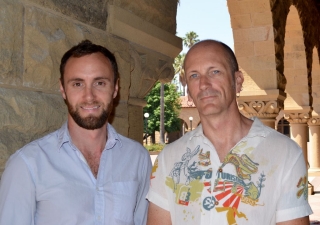 Hugo Hilton and Paul Norman were part of the team that found a new kind of mutation in the immune genes of the Khoe-San people.
Courtesy of Hugo Hilton

The Khoe-San — known for the unusual clicking sounds in their language — harbor unusually high genetic diversity, about 10 times more among their 100,000 people than among modern Europeans.

Khoe-San genomes are an excellent place to look for unusual human genes. “We knew we’d find novel genes,” said Hugo Hilton, DVM, a research scientist and lead author of the paper. “Our work has allowed us to understand the evolution of these genes, not only in the Khoe-San but in populations around the world.”

The immune system genes of interest to Parham’s team code for two sets of proteins. On the surfaces of ordinary cells are proteins called HLAs, which mark cells in ways so specific that a person’s immune system recognize cells as self or not self. If a surgeon transplants a kidney, the recipient’s immune system can tell that the kidney is someone else’s — just from its cell surface HLA proteins — and the patient’s immune system signals its natural killer cells, or NK cells, to attack the transplanted kidney.

The most varied genes HLA genes are the most variable of the genome. So Parham and others have been trying to measure how much HLA genes vary within and between populations around the world. If you look at the population of the Bay Area, for example, you’ll find hundreds of variants, because people come from all over the world. “In the Khoe-San, there are 10 or 11 variations of one of these genes, whereas when we looked at Amerindians a few years ago, they basically only had one version,” said Norman. Doing organ transplants among people with few variants is relatively easy, whereas doing the same transplant among the Khoe-San would be difficult.Peter Parham

To recognize HLA proteins, NK cells deploy receptor molecules called killer-cell immunoglobulin-like receptors, or KIRs, which bind to foreign HLA proteins. In most people in the world, one kind of KIR receptor binds to HLA C2 cell surface proteins, and another kind binds to HLA C1 proteins. The difference between the two kinds of proteins is critical. If you have an infection, you might want those NK cells to latch onto C2 molecules. If you are carrying a baby, however, you don’t.

That’s because special NK cells in the uterus play an important role in reproduction by regulating the blood supply to a developing embryo. “The NK cells are involved at the beginning of pregnancy in helping develop the maternal blood vessels in the placenta, where they can supply a lot more blood to the developing embryo,” said Parham.

The placenta is the interface between the embryo and the mother. Early in pregnancy, when the placenta is forming, the mother’s NK cells bind to the embryo’s placental cells. Sometimes, the mother doesn’t have the gene for the C2 protein but the embryo does, having received the gene from its father. In that case, the mother’s NK cells attack the C2-marked cells, leading to a poorly formed placenta that delivers insufficient blood to the fetus, a common problem that leads to low birthweight babies. The problem is also associated with dangerous high blood pressure, or pre-eclampsia, in the mother.

Binding more C1 and less C2 reduces these risks, and the novel version of the KIR gene that Parham’s team found does just that. It no longer binds to C2 and instead has switched to binding C1. Immune cells are renowned for their ability to respond with great specificity to other molecules, so the researchers said it’s remarkable that a small mutation could completely reverse the specificity of a receptor.

Parham’s team also found a second variant of the KIR gene among the Khoe-San. This KIR allele simply makes a damaged receptor that does not bind to C2. Together, these two gene alleles greatly reduce the frequency of C2 receptors and increase C1 receptors in Khoe-San, presumably making for healthier babies.

The work was supported by the National Institutes of Health (grants AI17892, AI090905 and GM109030), the March of Dimes Prematurity Research Center at Stanford University and the School of Medicine.