RIVERSIDE, Calif. – Each year, dengue fever infects as many as 100 million people while yellow fever is responsible for about 30,000 deaths worldwide. Both diseases are spread by infected female Aedes aegypti mosquitoes, which require vertebrate blood to produce eggs. The blood feeding and the egg development are tightly linked to how the mosquito transmits the disease-causing virus.

Now a team of entomologists at the University of California, Riverside has identified a microRNA (a short ribonucleic acid molecule) in female Aedes aegypti mosquitoes that when deactivated disrupts the mosquito’s blood digestion and egg development – a discovery that could help control the spread of not only dengue and yellow fever but potentially all vector-borne diseases.

MicroRNAs do not code for protein products but play powerful regulatory roles in development and cell growth; their mis-regulation leads to defects, including cancer. The researchers asked if microRNAs were involved in essential functions in female mosquitoes such as blood feeding and egg maturation. These functions are required not only for successful reproduction, but also serve as a foundation for the mosquito’s ability to transmit pathogens of devastating human diseases.

In their experiments in the lab, the researchers were screening a number of microRNAs in female Aedes aegypti mosquitoes to study their behavior during blood feeding and reproduction, when they found one microRNA, “miR-275,” was highly elevated during egg development.

Next, the researchers developed a method for specific deactivation of miR-275 in Aedes aegypti females and fed these mosquitoes with blood to analyze what effects occur when female mosquitoes no longer have this microRNA at their disposal.

They found that the blood these mosquitoes had fed on remained undigested in their guts. Further, the overall volume of the engorged blood was unusually large, suggesting that the mosquitoes’ fluid excretory function had been impeded. The researchers also found that in these mosquitoes, egg development, whose success is dependent on blood digestion, was severely inhibited.

“Our finding is exciting because it gets to the very core of what a vector of diseases is all about,” said Alexander Raikhel, a distinguished professor of entomology, whose lab led the study. “We can now knock down a series of events – starting with the digestion of blood and proceeding all the way to egg maturation – simply by eliminating this small molecule, miR-275. In tropical areas of the world, where dengue and yellow fever are often leading causes of hospitalization and death among adults and children, a reduction in the number of Aedes aegypti mosquitoes would be tremendously beneficial.”

Study results appear this week in the online edition of the Proceedings of the National Academy of Sciences.

Next in this line of work, Raikhel’s lab plans to focus on determining which genes miR-275 targets, what roles these genes play in blood digestion and egg development, and what mechanism underlies the activation and deactivation of miR-275.

Bart Bryant, the first author of the research paper and a postdoctoral researcher in Raikhel’s lab, explained that the research team knocked down or “depleted” the miR-275 with an “antagomir” – a small synthetic RNA molecule that in this research study binds with miR-275, preventing it from doing its job of allowing blood digestion and egg development to proceed.

“We think our work has opened the door for exploring how microRNAs regulate critical physiological functions specific to vectors that transmit deadly disease pathogens,” Bryant said.

The study was supported by a 10-year grant to Raikhel from the National Institutes of Health. Raikhel, a member of the National Academy of Sciences, and Bryant were joined in the study by Warren MacDonald, a graduate student in Raikhel’s lab. 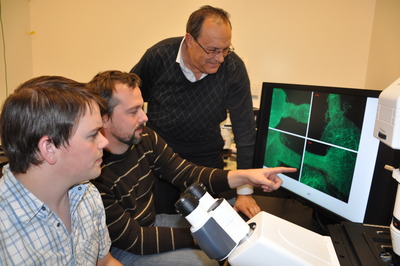 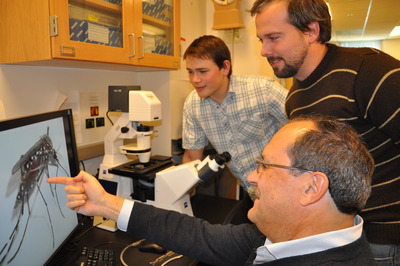 Warren MacDonald (left), Bart Bryant and Alexander Raikhel (seated) take a look at an image of a female Aedes aegypti mosquito whose gut has undigested blood. The researchers developed a method that deactivates a key microRNA in the mosquito; this microRNA is responsible for blood digestion and egg development. Photo credit: UCR Strategic Communications.