Houston -Monitoring everything from explosives to tainted milk, materials for use in creating sensors for detection devices have been developed by a University of Houston (UH) chemist and his team. The findings recently appeared simultaneously in three journals. 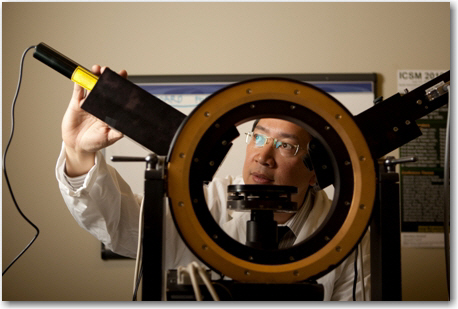 “There are many dangerous substances, pollutants and infectious bacteria we are constantly exposed to,” said Rigoberto Advincula, a highly cited materials scientist at UH. “Our work is poised to assist in such efforts as rapidly detecting explosives or banned substances in airports for homeland security, as well as monitoring commercial products like milk and pet food for substandard additive products. There is a need to measure this quantitatively and in a rapid manner.”

In a two-stage effort on which a provisional patent has been filed, Advincula’s team fabricated the polymer materials and then built a device that was used as a sensor. The work is based on what he calls “the artificial receptor concept.” This is akin to an enzyme functioning as a biochemical catalyst within a cell, like an antibody, binding with specific molecules to produce a specific effect in the cell. The elements in Advincula’s work, however, deal with metals and plastics and are called molecular imprinted polymers (MIP), a concept also used for making plastic antibodies. These polymers show a certain chemical affinity for the original molecule and can be used to fabricate sensors.

Based in electrochemistry, the films were prepared by electrodeposition, a process similar to electroplating used for metals in the automotive and metal industries. Their key innovation was to use a process called electropolymerization directly on a gold surface and attached to a digital read out. The group’s next step is to put this film on portable devices, thus acting as sensors. 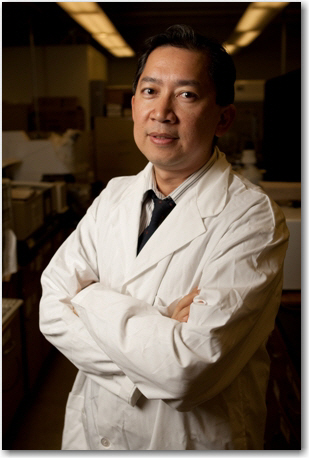 “Our materials and methods open up these applications toward portable devices and miniaturization. Our device will allow, in principle, the development of hand-held scanners for bomb detection or nerve agent detection in airports,” Advincula said. “This means accurate answers in a rapid manner without loss of time or use of complicated instruments. We can achieve very high sensitivity and selectivity in sensing. The design of our molecules and their fabrication methods have been developed in a simple, yet effective, manner.”

The culmination of a year’s work, the research being published simultaneously in three journals is a record for Advincula’s group. These publications – Macromolecules, Applied Materials & Intefaces, and Biosensors & Bioelectronics – are among some of the most prestigious and highly cited in this area of study.

Macromolecules is the most-cited journal on polymer science, and Applied Materials & Intefaces is an upcoming international forum for applied materials science and engineering. Both are put out by the American Chemical Society (ACS), which provides a comprehensive collection of well-cited, peer-reviewed journals in the chemical sciences. Biosensors & Bioelectronics is the principal international journal devoted to research, design, development and application of such devices and is published by Elsevier, one of the world’s leading publishers of science and health information.

In the coming year, the researchers hope to expand the work to many other types of dangerous chemicals and also to proteins given off by pathogens. Ultimately, they plan to create portable hand-held devices for detection that will be made commercially available to the general public, as well as being of interest to the military. Advincula plans to seek additional funding and collaborators to reach these goals. Advincula currently has funding from the National Science Foundation and also works in collaboration with some companies.

Student success is another key element that Advincula emphasizes. In addition to becoming an ACS fellow last year, he received UH’s undergraduate research mentoring award and is particularly committed to student success in a materials discovery environment. He says there are few labs like his that have the capability to develop all the chemistry in concert with developing the device and doing the surface analysis all in one location. The set-up provides students a unique environment for discovery.

The two students working on this project who are being trained in his lab are Roderick Pernites and Ramakrishna Ponnapati. Pernites, who is finishing his Ph.D. this semester, recently received the ACS best poster award in the colloids division and currently has eight publications in Advincula’s group. Ponnapati, who studied under Advincula and received his Ph.D. in 2009, is now a postdoctoral researcher in UH’s department of chemical and biomolecular engineering and previously received a best student award with the Society of Plastic Engineers chapter in Houston.

NOTE TO JOURNALISTS:  High-resolution photos of Rigoberto Advincula are available to media by contacting Lisa Merkl.