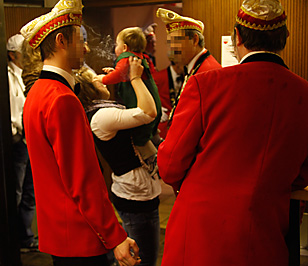 In every third bar or restaurant in Germany’s biggest state, North Rhine-Westphalia, people still smoke. This is the result of a DKFZ study in which more than 2,000 businesses in 15 cities were inspected in February 2011. While smoking is banned in most restaurants, there are only few pubs and bars where one can drink a beer in a smoke-free environment. Violations of the non-smoker protection act are very common in the catering industry: 92 percent of smoking bars and restaurants do not comply with legal provisions. Thus, freshly cooked food is offered and obligations to display signs, in particular relating to youth protection, are ignored. 81 percent of smoking clubs do not carry out obligatory access controls. 70 percent of smoking rooms do not comply with legal requirements. Frequently, there is no complete separation of smoking and non-smoking rooms. “All these deficiencies adversely affect not only patrons but, most importantly, employees, who have to work while breathing air contaminated by tobacco smoke every day,” says Dr. Martina Poetschke-Langer, head of the Division of Cancer Prevention at DKFZ.

In discotheques there is no effective protection from second-hand smoke either. Test visits by the NRW Consumer Advice Center in mid-March showed that only three of fifty dancing establishments are smoke-free. In 34 discotheques there is a smoking zone, which, however, is not sufficiently separated from the non-smoking area in most cases. Of 47 discotheques in which smoking is allowed, only four have officially declared to be smoking clubs. From a health perspective it is particularly alarming that cigarettes are lighted even around the dance floor in many discos. Klaus Mueller, chairman of NRW Consumer Advice Center, comments on the multitude of legal violations: “The fact that young disco-goers – no matter whether they consume cigarettes or not – are exposed to harmful non-stop smoke in one of their favorite recreational facilities is a sobering finding. The logical consequence is that those special regulations which leave enough space for misuse must urgently be abolished in North Rhine-Westphalia.”

The two studies were financially supported by the Dieter Mennekes Environmental Foundation in Kirchhundem. Moreover, the Foundation commissioned a photo documentation on smoking habits at Rhineland children’s carnival events. It turned out that only four of fourteen inspected events in the Cologne-Bonn-Duesseldorf region were smoke-free. Although at seven kids’ events smoking was prohibited in the ballroom, people smoked in the foyer with doors left open so that smoke penetrated into other rooms. An outrageous situation was found in three marquees, where people were smoking non-stop and everywhere, even in the presence of babies and very young children. “The children are not only poisoned here, they also learn from very young that smoking and social activities seem to belong together. It is time that we put an end to this toxic form of cheerfulness,” said the Foundation’s initiator, Dieter Mennekes.

The three studies illustrate that non-smokers can only be effectively protected if all indoor public places remain smoke-free. The participating institutes therefore appeal to legislative bodies to close existing legal loopholes, to abolish exceptions in the catering industry and to ensure consequent implementation of a comprehensive smoking ban.