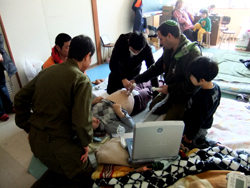 When the earthquake and tsunami struck Japan on March 11, disaster teams rushed to treat those who were gravely injured. But in the days and weeks following the initial crisis, the largest medical challenge was not treating patients with traumatic injuries.

Shinji Tsunawaki, M.D., (masked) of the U-M affiliated Shizuoka Family Medicine program, assesses a pregnant woman who was stranded in a remote area following the March 11 earthquake and tsunami.

In 2009, the program was awarded a $1.4 million grant from the Shizuoka Prefectural Government to help establish a family medicine residency training program and help Japanese doctors revamp the way family medicine is practiced in Japan. Despite having a universal health insurance program, the health care system in Japan funnels specialists into offices where the majority of their work is general care. This setup does not leave them adequately prepared to contend with the broad spectrum of conditions seen in family practice, Fetters explains.

When they arrived in the town of Minami Sanriku on March 25, they discovered that those who had been seriously injured had already been treated by physicians from the Japan Disaster Medical Assistance Team and the Japan Red Cross.

Although primary care doctors have a national organization with a certification process, the government does not recognize the specialty and many doctors do not hold family physicians in high regard, Fetters says.

“When I arrived, there was a mismatch between many of the doctors’ training and the needs of the disaster victims,” Tsunawaki says. “There were a lot of people who needed ordinary care – the kind of stuff that family doctors do.”

Fujioka met a pediatric heart surgeon who encountered many primary care problems he was unsure how to treat, such as a diabetic patient having trouble with his insulin dosing.

“While the disaster relief teams were providing urgent care, most of the patients needed medications and support for chronic conditions, or they had the kinds of common problems that family physicians specialize in, like respiratory infections or diarrhea,” Fujioka says.

When the two doctors asked who was caring for the local pregnant women, the disaster teams were at a loss.

Fujioka and Tsunawaki examined one woman whose obstetrician was missing and believed to have been carried away by the tsunami. They provided prenatal care for her and the unborn child, and helped her get in touch with a hospital where she could get ongoing care.

They also provided prenatal care to another woman was only two weeks away from her due date, but was stuck in a remote area with no car and no gas. Using an ultrasound machine borrowed from an Israeli disaster team, they were able to scan the baby and confirm it was in a normal position for birth. They contacted Japan Self-Defense Forces, who transported the woman to a hospital two days later. Before they left the home, the doctors assisted a 92-year-old family member with terminal cancer who was having trouble breathing.

They also provided care to a woman who had recently given birth, which the pediatrician who stopped by the day before to check on her baby was not trained to do.

“I am used to seeing pregnant patients, kids, old patients,” says Tsunawaki. “They’re just the usual things I do.”

While the scope of the tragedy still has not been fully assessed, Fetters says he hopes that the value of the efforts of the two primary care physicians and their colleagues with the Japanese Primary Care Association will earn them the respect and recognition they deserve.

Yukishige Ishibashi, M.D., vice-president of the association, is proud of the work they were able to accomplish. “We had a chance to show that teams that included family doctors, dentists, nutritionists and pharmacists working together could play an important role,” he says.

More information can be found at www.pcforall.primary-care.or.jp/eng/