“The incidence of strokes occurring in children is similar to that of pediatric brain tumors,” said Dr. Lisa Nassif, assistant professor of pediatrics and neurology at BCM and pediatric neurologist at Texas Children’s Hospital. “The more that people become aware that strokes can in fact happen in children, the more we will be able to maximize the potential for recovery and prevent recurrent strokes.” 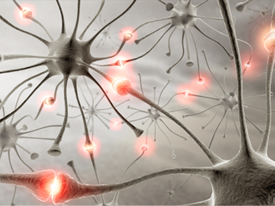 Children can experience ischemic strokes, which occur when there is blockage of blood flow in a major artery, or hemorrhagic strokes, which is caused by a ruptured blood vessel in the brain. These two types of strokes are equally common in children, whereas most adult strokes are ischemic.

Common risk factors for pediatric strokes include congenital heart disease and sickle cell anemia. In addition, they can be caused by clotting disorders, infection, and trauma.

Neonatal strokes occur in newborns up to about 28 days, and may be associated with congenital heart disease or problems that occur during the pregnancy or delivery, such as abruption or an infection in the mother or the baby. Strokes in newborns are more common than strokes in older children, Nassif said.

Sudden weakness and numbness, particularly on one side of the body, vision loss and language difficulty are potential symptoms of stroke in kids, just as in adults. Children, especially younger children, may experience seizures. Headaches may also occur with strokes in children.

Children are treated for ischemic strokes in much the same way that adults are treated. They are generally given aspirin or blood thinners to prevent stroke recurrences, and medical evaluations are performed to determine the cause of the stroke, such as cardiac or other disorders. Rehabilitation is started early to help the children improve their physical and cognitive functioning.

Research on the best treatment has lagged behind research on adult strokes because pediatric stroke is so rare, Nassif said.

Another issue regarding treatment is that it is often delayed because people don’t recognize the symptoms as being that of a stroke, said Dr. Donald Yee, assistant professor of pediatrics – hematology at BCM. Yee treats pediatric stroke patients through the hematology service at the Texas Children’s Cancer Center.

“Because people aren’t often aware of this issue, it can lead to underrecognition and misdiagnosis, which in turn can mean delays in therapy,” Yee said.

Studies have shown that the delay from presentation of symptoms to diagnosis of stroke can be one or two days, which goes beyond the recognized window for treating acutely with methods like tissue plasminogen activator, or tPA, and clot-busting drugs, Yee said.

Stroke recovery is another focus of current research, Nassif said. Some studies have indicated that children experience recovery beyond the one-year mark, which is considered the point in adults after which strides in recovery end.

In addition, children’s brains, especially the younger they are, are able to handle injury differently than adult brains because of their plasticity, Yee said. He cautioned not to draw too much reassurance from this, however. As much as 70 percent of children who suffer strokes will have long-lasting neurological effects.

“Children definitely can make big strides in recovery but still come out different than they were before, with long-term learning and thought processing disabilities and often physical disabilities,” Nassif said. “Pediatric strokes are dramatic when they do happen because children have so much life ahead of them and will be dealing with their disabilities for a long time.”

While still relatively rare, both Nassif and Yee stressed the importance of awareness of pediatric strokes – especially among patients and parents of patients with heart disease and sickle cell anemia.