Researchers gathered data on the frequency, direction, and magnitude of head impacts from players who wore sensor-equipped helmets during three football seasons at Brown University, Dartmouth College, and Virginia Tech. The data amount to a measure of players’ exposure to head impacts, which can ultimately help physicians and scientists understand how concussions occur. 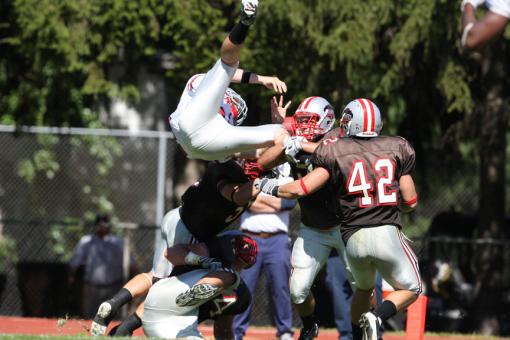 PROVIDENCE, R.I. [Brown University] — Thousands of college football players began competing around the nation this week, but with the thrill of the new season comes new data on the risks of taking the field. A new study reports that running backs and quarterbacks suffer the hardest hits to the head, while linemen and linebackers are hit on the head most often. The researchers measured head blows during games and practices over three seasons at Brown University, Dartmouth College, and Virginia Tech.

The study, led by Joseph J. Crisco, professor of orthopaedics in the Warren Alpert Medical School of Brown University and director of the bioengineering laboratory at Rhode Island Hospital, documented 286,636 head blows among 314 players in the 2007-09 seasons. Crisco said the new data on the magnitude, frequency, and location of head blows amounts to a measure of each player’s head impact exposure. Ultimately it can help doctors understand the biomechanics of how blows to the head result in injury.

“This allows us to quantify what the exposure is,” Crisco said. “It is the exposure that we need to build upon, so that we can then start understanding what the relationships are with acute and chronic head injury.”

The study appears online in advance in the Journal of Biomechanics.

Concussions and other head injuries have become a source of elevated concern in football and other sports in recent years, with various leagues revising policies to protect players better. In part based on seeing this new data, said Robin Harris, Ivy League executive director, league officials announced earlier this year that full-contact practices would be limited to two a week.

Hits by position
Data from helmet sensors shows that running backs and quarterbacks suffer the hardest hits to the head, while linemen and linebackers are hit on the head most often.Hits by position

The new study documents the nature of head blows by player position. Players on the three teams wore helmets equipped with wireless sensors that measured acceleration in various directions. That data allowed the team of researchers from Brown, Dartmouth, Virginia Tech, and sensor-maker Simbex to discern how hard the hit was, how often each player was hit, and where on the helmet they were hit.

Crisco devised the algorithm that Simbex’s Head Impact Telemetry System uses to measure head impacts. The system’s development and this study were funded by the National Institute of Child Health and Human Development and the National Operating Committee on Standards for Athletic Equipment.

The data on head acceleration and hit direction are used to calculate a composite score of exposure called HITsp that researchers believe might be a good predictor of concussion. On average, running backs had the highest HITsp, 36.1, followed by quarterbacks with 34.5 and linebackers at 32.6. Offensive and defensive linemen had the lowest HITsp numbers, with 29.0 and 28.9 respectively, but along with linebackers, they were hit on the head most often. Doctors worry not only about hit severity, but also hit frequency, because repeated head impacts may cause “subconcussive” neurological damage over time.

“It will allow us to begin to understand how to control the exposures,” Crisco said. Controlling head impact exposure is critical, he added, because there are currently no treatments for acute or chronic brain injuries, and helmets cannot prevent injuries for all players in all situations.

Crisco and his colleagues are now analyzing data about concussions during the three seasons to determine how and whether head impact exposure is associated with injury. He recently co-authored another paper about male and female collegiate hockey players, which reported that although women were diagnosed with more concussions, they sustained fewer and less severe head impacts.

Although Crisco’s analysis is still underway, his insights into head impact exposure led him and co-author Richard Greenwald, a Dartmouth engineer, to write a commentary earlier this year in Current Sports Medicine Reports, in which they argued that intentional use of the head in sports must be curbed.

“We propose the adoption of rules — or in some sports, we champion the enforcement of existing rules — that eliminate intentional head contact in helmeted sports,” they wrote. “When coupled with education that leads to modified tackling, blocking, or checking techniques, these rules will reduce head impact exposure and have the potential to reduce the incidence and severity of brain injury.”

Crisco, a former college football and lacrosse player, said he is passionate about contact sports and believes they have many benefits.

“Hitting is an essential component,” he said. “But intentional hitting with your head was never part of any sport and is poor technique.”

In addition to Crisco and Greenwald, other authors of the paper are Bethany Wilcox of Brown; Jonathan Beckwith and Jeffrey Chu of Simbex; Stefan Duma and Steve Rowson of Virginia Tech and Wake Forest; and Ann-Christine Duhaime, Arthur Maerlender, and Thomas McAllister of Dartmouth.