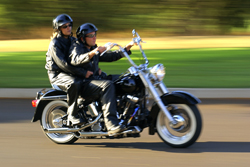 Motorcycle helmets are jokingly referred to as brain buckets, but studies have shown that wearing a helmet while on a motorcycle greatly reduces one’s chance of dying or suffering a debilitating head injury in a crash. Helmet use has also been shown to save billions in medical costs and lost earnings.

As the state legislature considers modifications to Michigan’s 42-year-old universal helmet law, the University of Michigan Health System and Saint Joseph Mercy Health System are joining the Washtenaw County Medical Society and other organizations in opposing the repeal of provisions that would make helmet use optional. (Follow this link to read the WCMS letter.)

“The national Centers for Disease Control and Prevention consider universal helmet laws the single most effective way for states to reduce motorcycle deaths. Helmets cut the risk of death by 37 percent and the risk of head injury by 69 percent,” echoes Robert McCurdy, M.D., chairman of St. Joseph Mercy Ann Arbor’s Department of Emergency Medicine. “The American College of Emergency Physicians and the Michigan College of Emergency Physicians have long endorsed and supported the adoption and enforcement of motorcycle helmet laws.”

Meanwhile, staff at both hospitals continue to see firsthand the devastation caused by serious motorcycle crashes on Michigan roads.

Klas – an avid street and off-road motorcyclist – was one of the authors of a 2002 U-M study which found riders who didn’t wear helmets incurred much higher medical costs. It found that inpatient hospital and rehabilitation costs were about $26,000 more for patients who were not wearing helmets. Moreover, the study did not include long-term rehabilitation costs or income loss, which can run into the millions.

Other studies have found that just over half of motorcycle crash victims had private health insurance coverage. For patients without private insurance, a majority of medical costs are borne by taxpayers, according to the National Highway Traffic Safety Administration.

Most patients in the U-M study were insured but, the authors cautioned, “The increased cost of hospitalization in these patients merely shifts the costs from the operator to the insurance company, and ultimately to the subscribers.”

The CDC estimates that helmet use in Michigan saves $43 million for every 100,000 motorcycles registered in the state. Across the country, helmet use saved roughly 1,829 lives and $2.9 billion in medical costs and lost earnings in 2008, the NHTSA reported. (If everyone wore a helmet, it would have saved an additional 828 lives and $1.3 billion.)

Universal helmet laws have been shown to increase helmet use and weakening helmet laws has resulted in significant drops in helmet use, according to a CDC report. For example, when Florida repealed its law in 2000, use fell from 99 percent to 53 percent.

“As a nurse, I can tell you that it deeply saddens all of us when someone comes in with severe head trauma or dies despite our best efforts because of an injury that could have been prevented by wearing a helmet,” Klas says. “Every day we see the life-changing results of these crashes. We see people with permanent brain damage that keeps them from ever working again. We see fiercely independent people suddenly reliant on others to take care of them. We see the enormous strain it puts on families.”

“We are unified in our opposition to the repeal,” she says. “This is about standing up for a smart public health policy – one that will save lives, prevent injuries and reduce health care costs.”

“Hospital Cost is Reduced by Motorcycle Helmet Use”
http://www.ncbi.nlm.nih.gov/pubmed/12352482

A member of Trinity Health, the nation’s fourth largest Catholic health care organization, SJMHS is committed improving the health of its communities by reinvesting its profits back into the community through new technologies, vital health services, and access for all. The hospitals of SJMHS provide approximately $100 million in community benefit to the communities it serves each year.