How well do we recall 9/11? Maybe not as well as we think 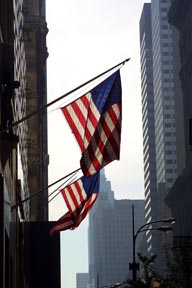 From Birmingham to Boston and Seattle to St. Louis, citizens froze at the sight of two commercial planes slicing into the sides of the World Trade Center’s twin towers. The images, it seems, are seared into our brains.

According to University of Alabama at Birmingham assistant professor of psychology Christopher Robinson, Ph.D., our 9/11 memories may not be as credible as we think.

“We have memories, but it doesn’t mean we remember,” he says.

Robinson’s 2004 dissertation, “A Time-lapsed Study of Memories for the Reception Events of September 11, 2001,” looked at the consistency and specificity of people’s memories associated with what they were doing and where they were when they heard about the terrorist attacks.

“Memory is very malleable,” he says. “As with most autobiographical memories, unless someone documented the event, there are very few ways to verify what someone was doing, how they learned about the events or how they felt upon hearing the news.”

He says that people who are asked what happened on the day of the event will give a story that will likely be different when asked again years later.

“That’s because many other things come into play,” he says. “You have something called retroactive interference.”

“Information you learn after an event can influence your prior memory,” he says, “and will be incorporated into your memory.”

After watching the news and talking with other people, those details color your forming memory, he says.

“Then, you talk about it and reinforce that colored memory,” he says. “It becomes the memory.”

Robinson says that people often say that when the planes struck the World Trade Center, they knew it was an attack on the nation. But if those same people would have been questioned on Sept. 10, the day before the attack, he suspects they would not have been able to conceive such an attack on the United States.

They only now say that they knew it was an attack because they have confirmation that it was. That’s their memory colored with retroactive information, he says. Indeed, initially his participants remembered the confusion about what had happened that day, such as the initially conflicting reports about the size and number of the aircraft, only to later “remember” that they immediately knew it was a terrorist attack.

But why is it that people remember anything at all about what they were doing on that day? Robinson says that when something breaks a routine it is more likely to be remembered.

“Sept. 11,2001, was a significant break in our routine with far-reaching consequences,” he says. “We talk about 9/11; we remember how much this changed our lives. Over time, we develop the memory surrounding it.”

If you do want to make sure your memory is accurate, Robinson recommends recording the details of the events immediately after they happen. When you do, however, you will be surprised at how your memory will be different from your written account year later, he says.

He notes an experiment among a group who were asked to write down their account of the Challenger explosion. Years later, they went back to their writings and remarked, “That’s what I wrote, but not what I remembered.”

Robinson says it’s usually OK to have memories that are colored with retroactive details (as long as you’re not a witness in court) and share them among family and friends.

“It could be cathartic or a bonding experience,” he says. “There is nothing wrong with that.”