Sledding injuries are a significant cause of hospitalizations, injuries during winter months 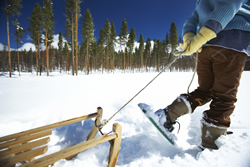 Sledding accidents are a significant cause of head injuries during winter months, according to new research presented University of Michigan pediatric faculty presented at this year’s American Academy of Pediatrics National Conference and Exhibition in Boston.

The research, presented Saturday, Oct. 15, at the American Academy of Pediatrics (AAP) National Conference and Exhibition (NCE) in Boston, supports the need for helmet use and other safety precautions to prevent traumatic sledding injuries.

Researchers reviewed data on children younger than 18 who were hospitalized at a pediatric trauma center from 2003 to 2011. The 52 children included 34 boys and 18 girls with an average age of 10. The most common cause of injury was their sled hitting a tree, occurring in 63.5 percent of the cases.

Thirty-seven percent (20) suffered a head injury, with 70 percent of these children admitted to the Intensive Care Unit. Three children had a permanent disability including cognitive impairment, and two others required long-term hospitalized rehabilitation.

Herman said the study results support the need for public education campaigns that encourage helmet use while sledding, as well as awareness of potential dangers on a sled course.

“We’ve seen a large increase in severe injuries resulting from sledding over the past year,” Herman says.