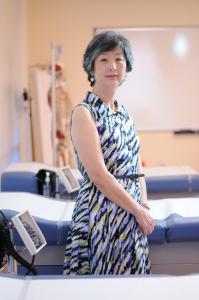 Dr. Cecilia Shikuma
In 2011, where medicines are available, HIV/AIDS has become a chronic disease instead of a death sentence.  That’s progress to celebrate, no question.  However, the Hawaiʻi Center for AIDS has found HIV appears to lead to ‘premature aging,’ which is presenting a new set of challenges.
To mark the upcoming World AIDS Day, the Hawaiʻi Center for AIDS will host a public forum on Wednesday, November 30, 2011, 5:30-6:30 p.m. at the John A. Burns School of Medicine, 651 Ilalo Street, Medical Education Building Room 315.
The most recent research by the Hawaiʻi Center for AIDS scientists will be discussed, including:
“We want, more than anything, to thank the people of Hawaiʻi and the many individuals who unselfishly participated in our HIV/AIDS clinical research and trials,” said Dr. Cecilia Shikuma. “Their participation has contributed to these significant advances in our understanding of HIV and its complications.” Shikuma also thanked the Hawaiʻi State Legislature for supporting the research program.
Next Steps
“As we look to the future, we will continue to participate in clinical trials intended to bring better and improved HIV medicines to our HIV infected patients,” said Shikuma.
The Center anticipates its major research efforts will concentrate on understanding why HIV leads to dementia, heart disease, osteoporosis, diabetes, kidney and liver disease and cancers.
“We suspect that these increases are due to the fact that HIV infected cells continue to circulate in the bloodstream, despite potent HIV medications that appear to mask the free virus in the blood,” said Shikuma. “We also believe the HIV virus has detrimental pro-inflammatory effects on various organ systems.”
By joining forces with scientists interested in studying the pro-inflammatory and ‘immune activation’ aspects of HIV, the Hawaiʻi Center for AIDS hopes to discover why chronic complications are increased in HIV.  The Center hopes to conduct a series of clinical trials focused in particular on HIV cognitive impairment and cardiovascular disease, with the goal of finding treatments and therapies to counter the increase in chronic complications.
An estimated 2,500 people in Hawaiʻi are infected with HIV.  UH Mānoa medical school doctors treat more than 400 AIDS patients in clinics on Oʻahu, Maui and Hawaiʻi Island.
Contact:
Tina Shelton, (808) 554-2586
Posted: Nov. 30, 2011
Share on:
or:
Our Newsletter Subscribe!