Think it’s time to unleash them both and let the fun begin? A child-safety expert at the University of Alabama at Birmingham warns against it. 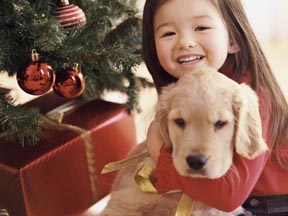 “Everyone thinks their dog is good and will never bite, but we can’t forget that all dogs are animals,” says David Schwebel, Ph.D. director of the UAB Youth Safety Lab. “If it’s provoked enough — and a child is much more likely to provoke it than an adult — even the best-behaved, best-trained dog can bite.”

Schwebel, associate dean for Research in the Sciences in the UAB College of Arts and Sciences, is the first author of a paper published in the most recent Journal of Pediatric Psychology that studied the effectiveness of software designed to teach children safety around dogs. They reported that the children did learn more about animal safety; however, they also demonstrated that the new knowledge did not translate to behavior.

Researchers evaluated 76 kids ages 3 to 6 in Birmingham and Ontario who used The Blue Dog software, which prompts kids to respond to computer-generated scenarios such as rousing a sleeping dog or playing with a dog’s toy. If the answer is wrong, the Blue Dog snarls.

The children used Blue Dog for three weeks at home then returned to the lab. Schwebel and his team recreated the computer scenarios — with real dogs — to test for knowledge of dog safety and actual behavior with a dog. The dogs and children interacted smoothly and no child was bitten, but the study results were mixed.

“The children knew more about dog safety than they did when they started,” said Schwebel.  “But their behavior was fairly similar before and after using the software, which suggests they weren’t translating the knowledge into their actual engagement with dogs.”

Schwebel, a professor in the UAB Department of Psychology, says this is explained by the early research of Swiss psychologist Jean Piaget, whose theory of cognitive development maintains that egocentrism — a child’s inability to distinguish their perspective from others — is prominent until they are at least age 4.

“We can teach rules — ‘Don’t go near a dog unless a parent is around’ — but children can’t understand dogs if they can’t understand perspectives other than their own,” Schwebel said. “Parents need to be involved. Children make mistakes such as petting toward the eyes or pulling the tail, and if you don’t have an adult to intervene, a child can provoke a dog to be dangerous.”

Schwebel says computer software is a good complement, but it will take more to ensure a child’s safety.

“In addition to software children need lessons in perspective-taking, decision-making and impulse-control,” said Schwebel. “These are basic skills that will improve children’s safety around dogs and will be useful to them in so many other domains of their lives.”