View a video with Dr. Jon Miller of the Institute for Social Research at University of Michigan. 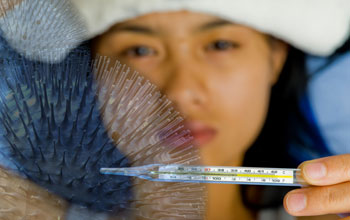 About one in five young adults in their late 30’s received a flu shot during the 2009-2010 swine flu epidemic, a University of Michigan (U-M) study released today says.

About 65 percent of Generation X was at least moderately concerned about swine flu during 2009-2010.
Credit and Larger Version

But about 65 percent were at least moderately concerned about the flu, and nearly 60 percent said they were following the issue very or moderately closely.

Using survey data collected from approximately 3,000 young adults during the 2009-2010 H1N1 influenza epidemic, this second of three parts in a U-M Generation X Report explores the first serious infectious disease Americans ages 36-39 ever experienced. It describes how the group kept abreast of the issue and what actions they eventually took to protect themselves and their families.

The data is part of the Longitudinal Study of American Youth conducted by the Institute for Social Research at University of Michigan and directed by Jon D. Miller, author of the report. The study, funded by the National Science Foundation since 1986, now includes responses from approximately 4,000 Gen Xers–those born between 1961 and 1981.

“These results suggest that young adults in Generation X did reasonably well in their first encounter with a major epidemic,” says Miller. “Those with minor children at home were at the greatest risk, and they responded accordingly with higher levels of awareness and concern.”

“This nationally-representative study helps us understand young adults’ knowledge of viral infections and the ways they sought information on the H1N1 epidemic,” says Gavin Fulmer, associate program director in NSF’s Division of Research on Learning. “The findings can inform public health officials about the relationships among health knowledge, accessible sources of health information and preventive behaviors. This may help us address future epidemics or other potential health emergencies.”

The results also show that even though a majority of Generation X young adults felt that they were “well informed” or “very well informed” about the issue, overall they scored only moderately well on an Index of Influenza Knowledge, a series of five items designed to test the level of knowledge about viral infections generally and about the swine flu epidemic specifically.

Among the other findings:

“In the decades ahead, the young adults in Generation X will encounter numerous other crises–some biomedical, some environmental, and others yet to be imagined,” says Miller. “They will have to acquire, organize and make sense of emerging scientific and technical information, and the experience of coping with the swine flu epidemic suggests how they will meet that challenge.”

A third Generation X Report on the topic of food and cooking will be issued in April 2012. Subsequent reports will cover climate, space exploration, citizenship and voting.