So-called lifestyle diseases are gaining ground with epidemic speed in low-income countries. The traditional health focus in these countries has been to combat communicable diseases such as malaria, HIV and tuberculosis. However, research from the University of Copenhagen suggests that dividing campaigns into combating either non-communicable or communicable diseases is ineffective and expensive. A new article by Danish scientists published in the well-reputed journal Science provides an overview.

See video with Professor Ib Bygbjerg where he provides an overview of the conclusions in the just published article in Science.

“This development means that 57% of the world’s deaths in 2030 will be due to the major non-communicable killers we know from the developed world: cardiovascular diseases, chronic lung diseases, diabetes and many types of cancer,” explains Professor Ib Bygbjerg from the Department of International Health, Immunology and Microbiology at the University of Copenhagen. In an article recently published in the well-reputed journal Science, he explains the need for new strategies to combat disease globally. 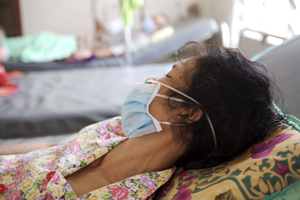 “The declaration continued an unfortunate tradition of dividing campaigns into communicable and non-communicable diseases. This practice ignores many new research results showing, among other things, that many types of cancer are caused by viral infections, while communicable diseases such as tuberculosis, for example, can only be fought effectively by also looking at tobacco and alcohol consumption,” states Ib Bygbjerg.

In the article published in Science, Professor Bygbjerg gives several examples of the necessity of having a joint campaign against communicable and non-communicable diseases. The simplest example is probably that since we know that diabetes increases the risk of tuberculosis – just as tuberculosis can bring on or exacerbate diabetes – why do we try to combat them separately?

“Naturally the main idea is that since we know that patients often suffer from several diseases, and that various diseases and their treatments influence each other, it is pointless to continue to develop large health programmes that only focus on fighting one single disease,” continues Ib Bygbjerg.

Integrated health programmes are the key

We can kill several birds with one stone by focusing on known common risk factors, such as poor nutrition, and developing strategies that integrate efforts to combat diabetes and tuberculosis, for example.

Stimulated by Danish support, China, India and other countries with major diabetes and tuberculosis problems have begun developing integrated health programmes with double-screening for these diseases. However, in many other cases, structural problems have prevented this type of integration.

“Researchers, healthcare workers and politicians are often forced to meet short-term results contracts as part of ’new public management’. This practice can easily turn efforts to deal with current and impending health problems into a battlefield over money needed to combat one disease or another, instead of addressing the actual double burden of communicable and non-communicable disease that will be borne by the large populations in developing countries, now and in future,” concludes Professor Ib Bygbjerg.